Greece in the world

Greece in the world

The parallel tragic fates of two thriving cities in antiquity – Pompeii and Akrotiri in Santorini – 1700 years apart, the story of their discovery under layers of volcanic ash and the impact their dramatic disappearance had on modern and contemporary art are the subject matter of the impressive exhibition “Pompeii and Santorini: Eternity in a Day”, presented at the Scuderie del Quirinale. Ceramics, jewellery, everyday objects and murals recreate the living environment of these two cities, providing information regarding their social and economic structure. (Until 06/01/2020). 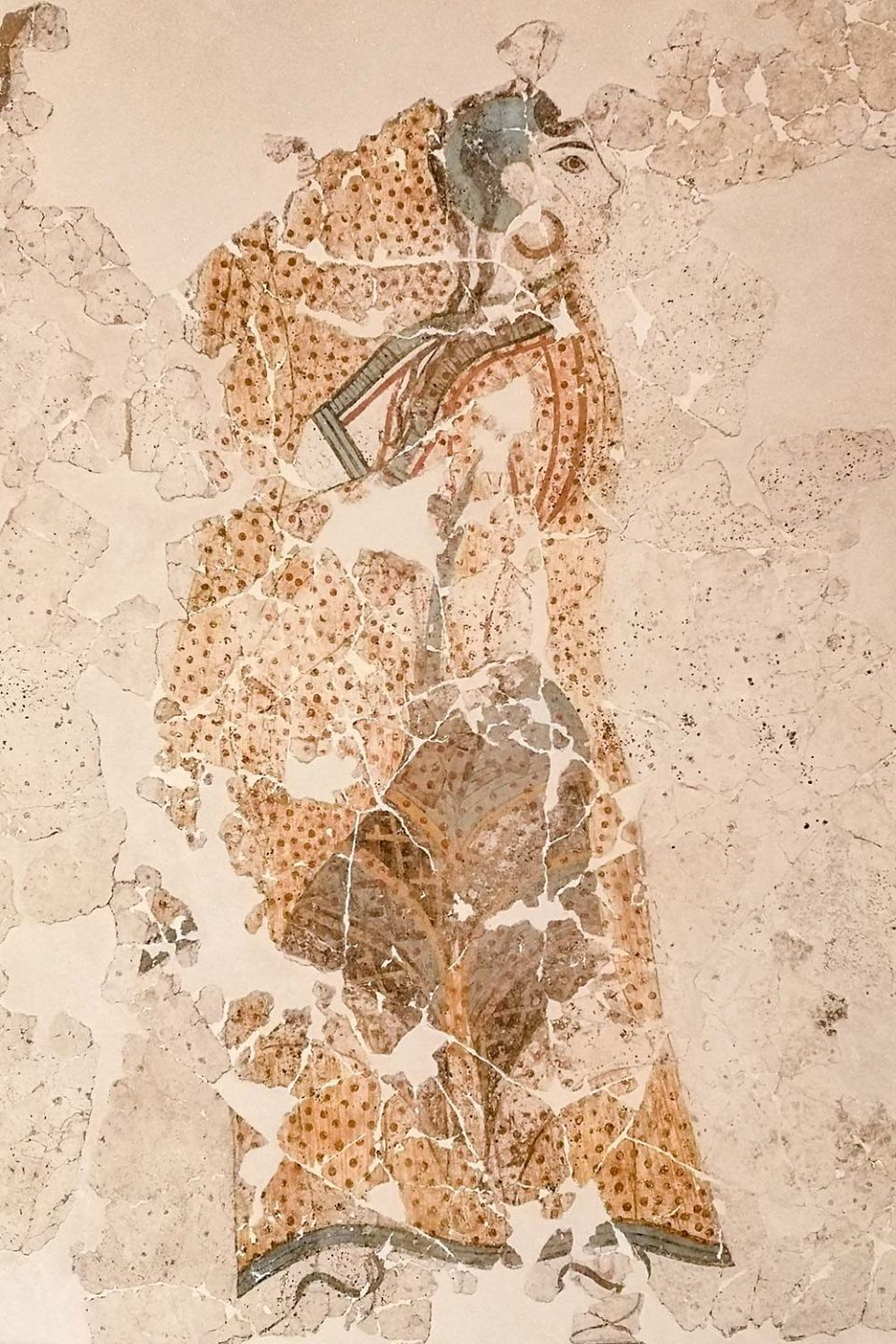 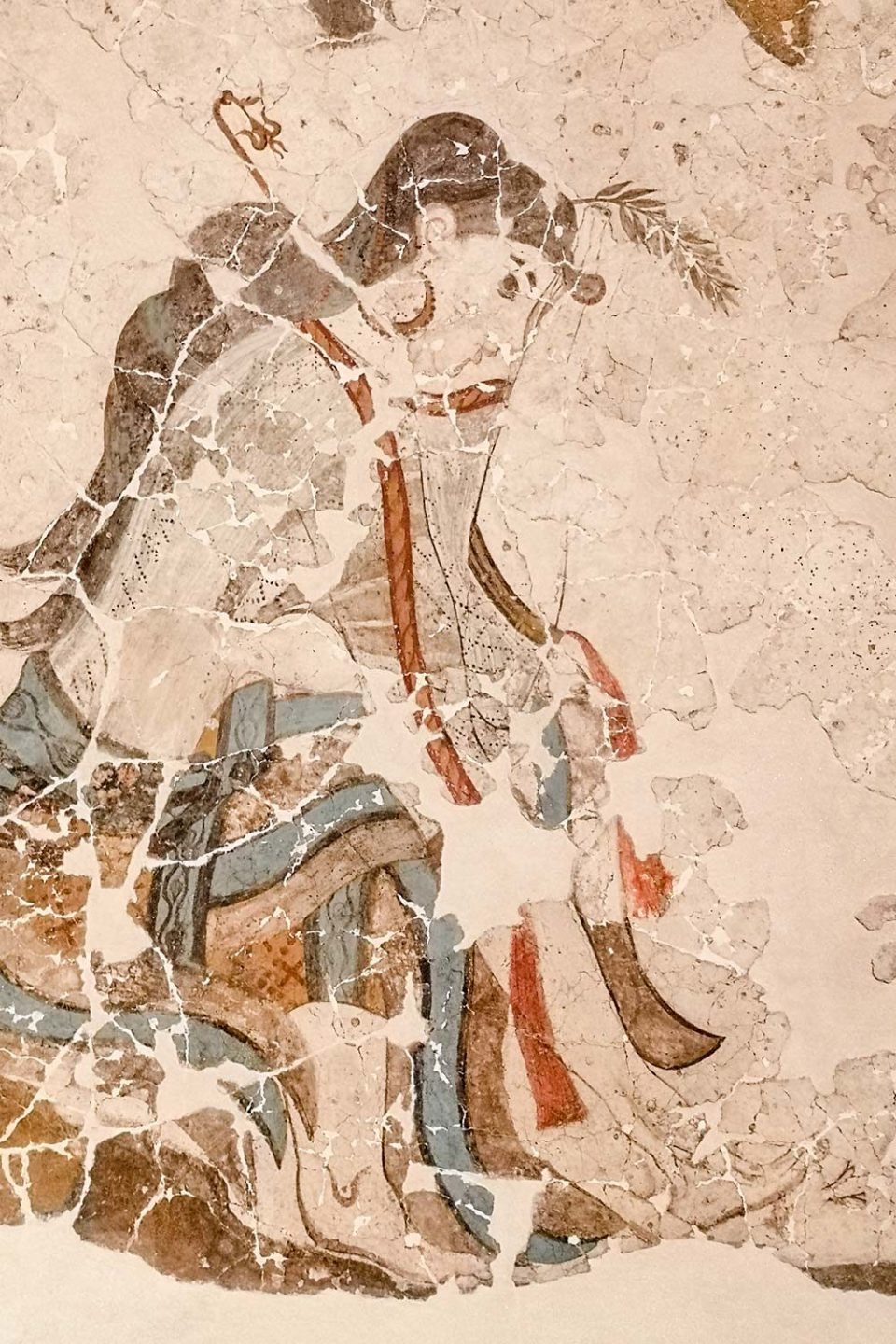 Paris, Grand Palais | The Greek of the Spanish Renaissance

Domenikos Theotokopoulos, the precursor of modernism, had been forgotten for more than two centuries after his death. The retrospective “Greco” – the first major survey held in France dedicated to the Spanish Renaissance mastery – traces his early years in Chandax in Crete, his study of the Byzantine tradition, his crossover to Italy and apprenticeship with Titian, and how he defined his personal style which coincided with his settling in Spain in 1577. The exhibition narrative showcases the artistry of his paintings and links his oeuvre to avant-garde movements: from cubism, phobism and expressionism, to abstract art. It is evident that El Greco is a rare example of an everlasting contemporary painter. (Until 10/02/2020, Grand Palais, Paris)

The impressive exhibition “Vanity. Stories of Jewellery in the Cyclades” presented by the Ephorate of Antiquities of the Cyclades, moves to the Guangdong Museum in the city of Guangzhou in southern China, in order to unfold the history of jewellery in the Cycladic region, from the perspective of human vanity, man’s need to adorn the body, to charm and to assert. The exhibition narrative begins at the Neolithic period, moves to the geometric period, the archaic and classical times and reaches the Greek medieval era, the period of Venetian rule and the folk art of modern times. Bone fibulas from Delos, faience bead necklaces from Thira, silver bracelets with zoomorphic terminals from Rineia, ornate amulets from Milos and 19th century earrings from Mykonos, with influences by foreign cultures, are all a testament to the prevailing design trends and materials used throughout the ages, up to the dawn of the 20th century. (Until 16/02/2020, Guangdong Museum).

Situated between three continents, Cyprus’s geopolitical location has profoundly influenced its cultural profile. Being a central hub of trade, on the crossroads of different Mediterranean traditions, it has a rich history spanning over 12,000 years. The exhibition “Cyprus: A Dynamic Island” at the National Museum of Antiquities in the Netherlands, features 300 valuable archaeological masterpieces from the island’s national collections, which reflect the influences neighbouring countries had on the birthplace –according to myth– of Aphrodite, during different historical periods, and testify to its wealth. (Until 15/03/2020, National Museum of Antiquities in the Netherlands). 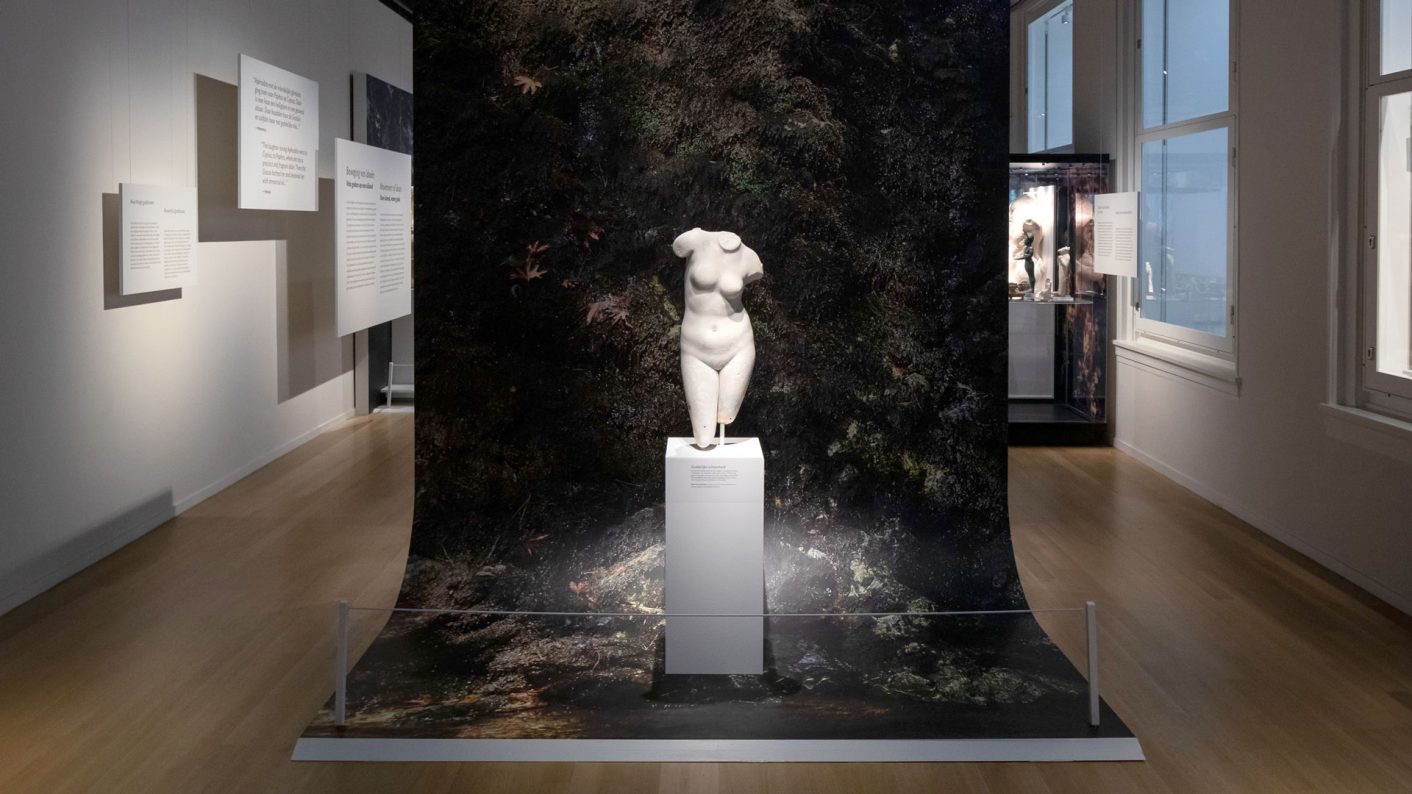 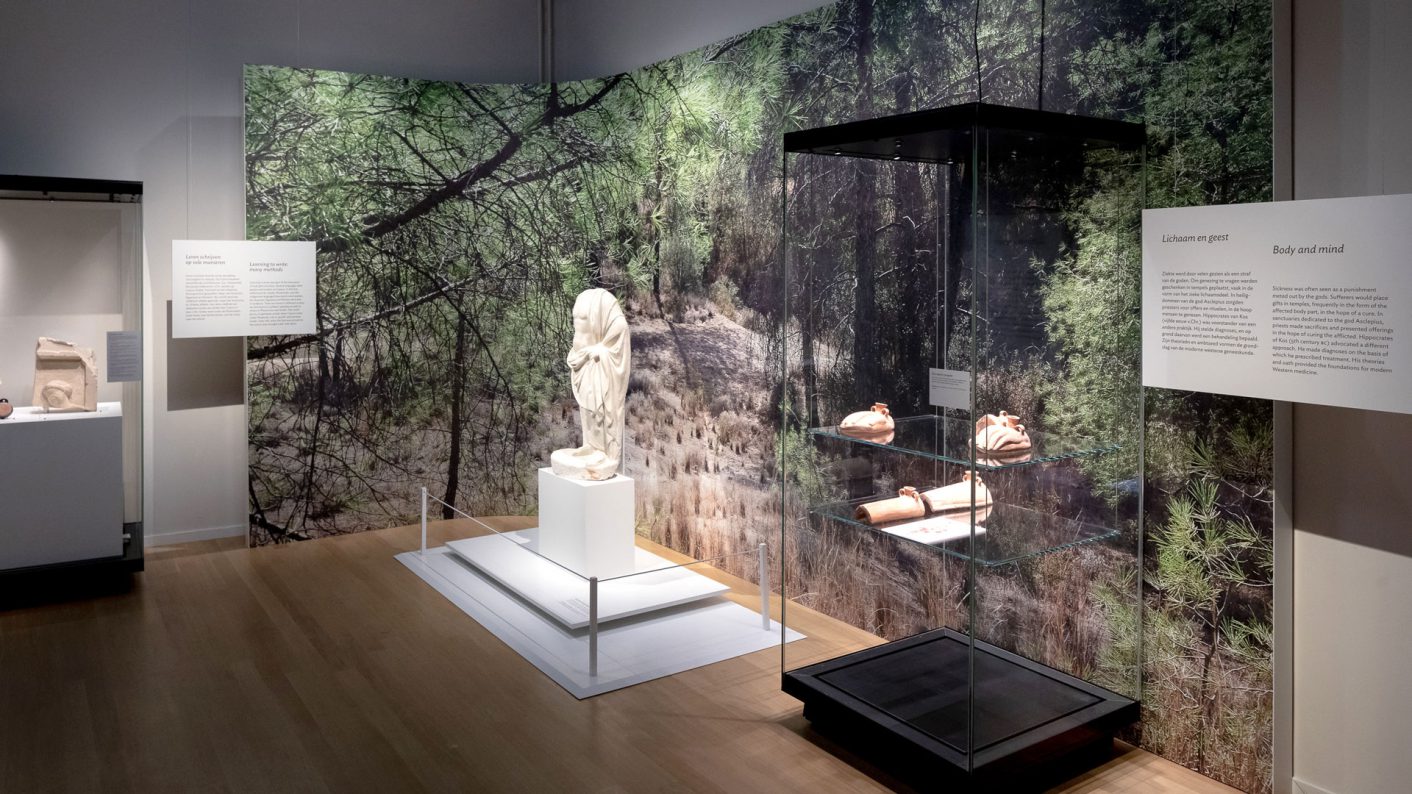 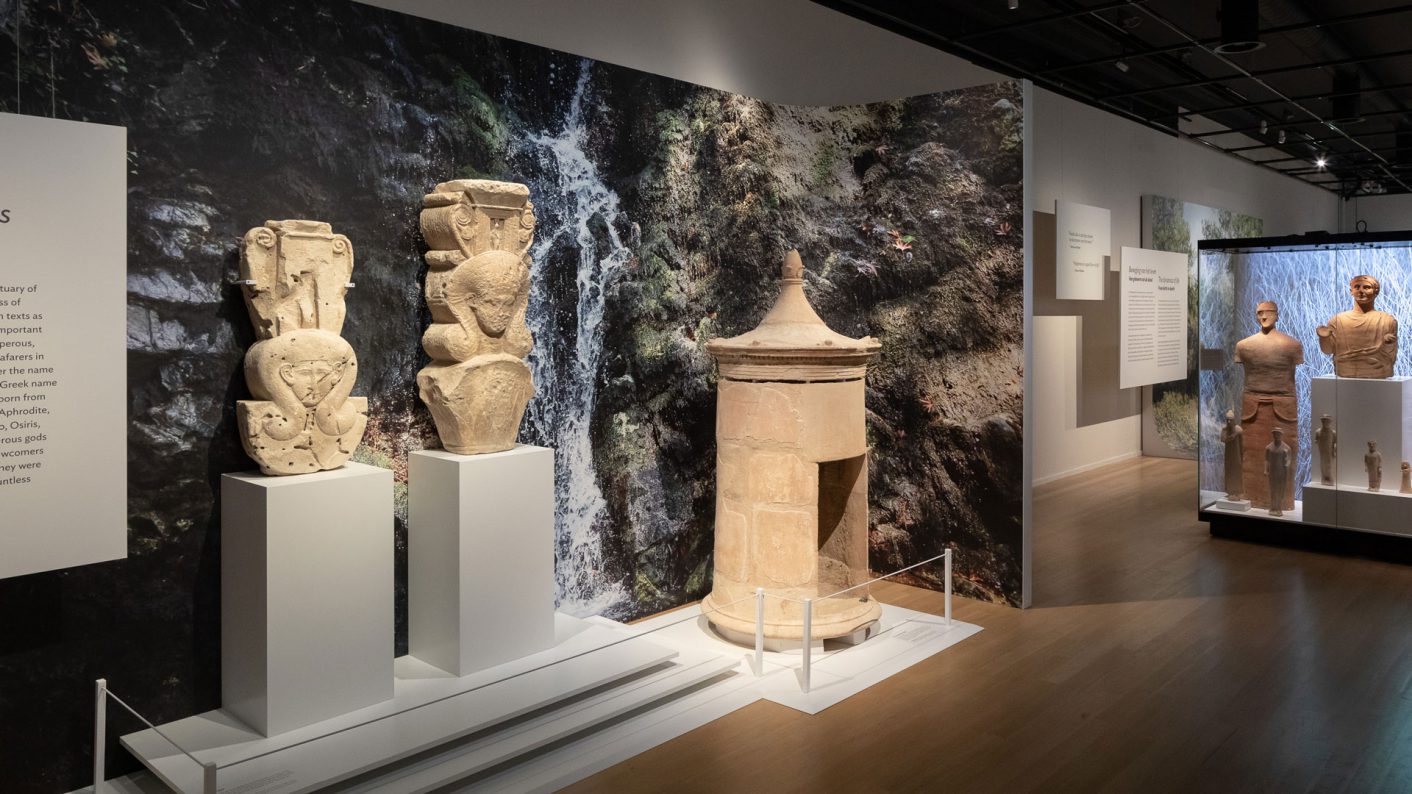 Giorgio de Chirico’s dreamy and cryptic universe is showcased in a magnificent exhibition named after him: “De Chirico”. More than 92 masterpieces spread across eight halls, trace the path of this great artist, from his early years at the Athens School of Fine Arts, up to his grand enigmatic compositions. Born in Volos in 1888, de Chirico was one of the most fascinating figures of modern art who paved a solitary road, far from norms and artistic trends. Ultimately, his metaphysical painting had a profound impact on the Surrealists, including Max Ernst, Salvador Dali and René Magritte. (Until 19/01/2020, Palazzo Reale, Milan).

What did Homer look like? Or Plato? Was Alcibiades really so handsome? The way in which ancient Greeks would portray actual persons influenced portraiture from the Renaissance to the present day. However, the depictions of prominent figures were almost never photorealistic. Social status, age, as well as the place of installation of a statue, were factors that could alter the actual features of the models. The exhibition “Tough Types. Portraits of Ancient Greeks”, illustrates the evolution of portraiture in ancient Greece, as well as the way in which the portrait of a political leader or philosopher was rendered. (Until 27/09/2020, Altes Museum, Berlin)

New York, The Metropolitan Museum of Art | Watercolors of the Acropolis

The Swiss watercolourist painter Émile Gilliéron settled in Athens in 1877. He was hired as an art teacher in the royal court, while at the same time, he would paint views of the city’s archaeological sites. He also designed a series of collector stamps for the first modern Olympic Games. During his career, he collaborated with Heinrich Schliemann in excavations, preserved frescoes in Knossos with his son, but also reproduced artifacts in marvelous detail that came to light in archaeological excavations. The exhibition “Watercolors of the Acropolis: Émile Gilliéron in Athens”,  includes five large-scale watercolours depicting architectural and sculptural details of the monument. Apart from the historical value of these paintings, it is also worthwhile seeing the traces of original colour with which the marbles were painted and later rendered onto the painting surface. (Until 03/01/2020, New York, The Metropolitan Museum of Art).

London, The British Museum | Myths and truths about Troy

The legend of Troy has been alive for more than 3,000 years. The embroilment of the glorious city in a decade-long war with the Greeks over Paris’s abduction of Helen, daughter of Spartan king Tyndareus, and its devastating downfall, have been at the core of many narratives from Homer and Virgil, to Shakespeare and Hollywood. The exhibition “Troy: Myth and Reality”, follows the footsteps of researchers and archaeologists in search of the lost city, beginning with Heinrich Schliemann’s excavations on the coast of Asia Minor in 1870, and through 300 objects -archaeological artifacts and works of art-, examines all the myths that have been handed down through the ages surrounding the dramatic destruction of Troy. (Until 08/03/2020, London, The British Museum).

The exhibition titled at Benaki Museum highlights the impact the Greek publisher had on the connection between ancient Greek heritage and modern expression.

The show “Qi Baishi. The Mysterious East”, exhibits 126 valuable paintings from his long artistic journey, highlighting his favourite themes, as well as his meticulous attention to detail.

The history of Greek fashion

Clothing folds, Byzantine embroidery and motifs of Greek folk iconography are reflected on the garments presented in the exhibition “Greek Fashion: 100 Years of Inspiration and Creation” at Hellenic Cosmos Cultural Centre.

The poetic world of a painter