Getaway to the wonderful castle town of Laconia in the southeastern Peloponnese, an ideal choice all year round.

Getaway to the wonderful castle town of Laconia in the southeastern Peloponnese, an ideal choice all year round.

At first glance, you see a small modern seaside town and an impressive rocky islet, just a few metres off the coast; but don’t be in a hurry to admire. The real surprises start when you cross the bridge and take the narrow asphalt road by the foot of the cliff. There, at the end of the road, the Middle Ages await you in their most authentic and hospitable version!

The past meets the present

The old town of Monemvasia is one of the few places on earth where the distant past harmoniously coexists with the present. This journey back in time begins as soon as you leave your vehicle behind, and pass through the castle’s old, authentic gate. The next moment, you find yourself in another world: Medieval buildings with narrow alleyways running through, mighty walls, Byzantine churches, marble coats of arms of noble families. Meanwhile, everything is bustling with life. Well-groomed bougainvilleas climbing up the walls of the houses. Children playing at the tiny squares and friendly cats lazing around on the time worn stairs. There are small shops and stylish cafes on the right and left of the main street. Many of the restored buildings have now become boutique hotels and guest houses offering all modern comforts, but in a frugal fashion and with just the right amount of medieval spirit.

A tour of the castle

The whole of Monemvasia is an attraction, so what better way than to let your feet guide you? Buy local products and tasteful souvenirs, wander around random alleys, “lose yourself” amongst the houses, go up and down the stairs, with an occasional peek into the small courtyards. On the way, you will come across historical churches, the house of the great Greek poet Yannis Ritsos (1909-1990), and pass through the central square with the cannon, where the two main cobbled streets meet. A small archaeological collection is housed in a building which used to be a mosque. If you follow the sound of the waves, you will soon find your way to the seaside ramparts and feel just like the guards who were once on the lookout for enemy ships at the Myrtoan Sea. If you turn your back to the sea and look up, you will see the ruins of Ano Poli. Walking up can be quite strenuous, but once you get there the atmosphere and view will surely reward you. At the highest point, on the edge of the cliff, stands the Byzantine church of Agia Sofia. It was built in the 12th century and houses wonderful frescoes from that era.

The best time for a walk is late in the afternoon, when the sea breeze cools off and the earthly hues of the dwellings are highlighted by the sweet sunlight.

ACCOMMODATION AT THE CASTLE

There are several top quality options for accommodation in the castle of Monemvasia. Among these are the following:

Theophano Art Hotel (+30 27320 61212, theophano.gr). Every room in this beautiful guest house hosts works of art and antique furniture from the owners’ personal collection.

Bastione Malvasia (+30 27320 63007,  bastionemalvasia.gr). Situated in a very privileged and quiet spot, at the end of the main cobbled street. The rooms are impeccable with an amazing view.

Swimming and nearby excursions

A swim at the fairytale scenery of the Monemvasia castle is a unique experience. If you want to experience it, just put on your swimsuit, take one of the downhill alleys and cross the medieval castle’s seaside gate, called Portello. The homonymous tiny rocky beach stands right there before you. If you prefer something more mainstream, then head to the shallow sandy beach of Gefyra in the new town, or better yet, to the beautiful Ambelakia beach, just a few kilometres south. To the north of Monemvasia you find Pori, with its wide sandy beach. Further on, if you follow the signs, you initially find yourself at the archaeological site of Epidaurus Limeras, where you will see ruins dating from prehistory to classical antiquity, and eventually reach the port of Gerakas. It is a picturesque fishing village built on the shore of a lagoon, in an small impressive fjord. There, after a refreshing dip, you can try the fresh seafood flavours at one of the fish tavernas.

The region’s most renowned delicacies are the goges and saytes. The first is handmade pasta served always with local butter and cheese. Saytes are thin crust fried pies with cheese and various green vegetables. As for the sweets, the ones that stand out are the Monemvasia macaroons (with almonds and rose water), the rafiolia (with almonds and mastic liqueur), and the samousades (a local version of baklava with sesame, walnuts, almonds, cinnamon and cloves). In the small shops of the castle and the new town you will find excellent quality honey, spoon sweets, pasta, and of course, the famous local wines.

There are many good dining options in both the old and the new town of Monemvasia.

The oldest taverna within the castle is Taverna tis Matoulas (+30 27320 61660, matoula.gr). Named after its first owner, it has been working ceaselessly since 1950, serving traditional meals in a yard with a view. Equally worthwhile are two nearby tavernas: Marianthi (+30 27320 61371), and Kanoni (+30 27320 61387). Vegetarian meals are served in all three establishments. Also found in the castle, is Byron’s Wine Kamara (+30 27320 61704) with a fairytale courtyard. Here, the hospitable owners serve wine accompanied by delectable appetisers. Within the walls, however, you can also go to the Chrisovoulo (+30 27320 62022), for traditional recipes with fusion touches and a very updated wine list. If you want to try goges and saytes in their most authentic and delicious version, then head to the village of Agios Ioannis, about 8 kilometres from Monemvasia, and get a table at the famous restaurant terrace of Vasilis (+30 27320 68312), or the cool courtyard restaurant at Athas (+30 27320 68375). 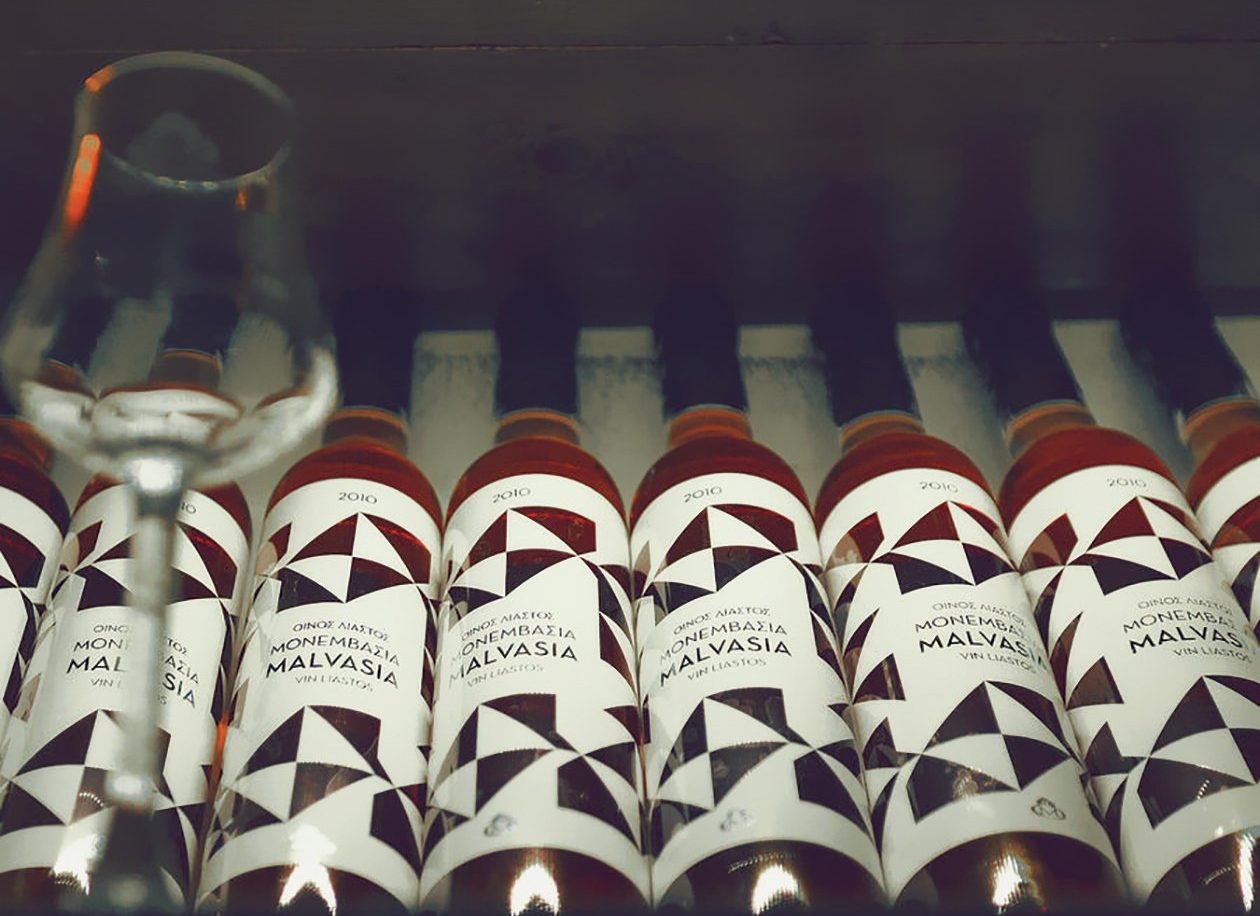 A wine with a Medieval aroma

The Italian name of Monemvasia (Malvasia) has been linked to a Byzantine wine variety born here, which dominated the medieval world for almost five centuries. The vineyards of Monemvasia were later destroyed and the variety appeared rather altered in other parts of the Mediterranean, in Madeira, as well as in California. Over the last decade, thanks to the heart-warming effort of winemaker Giorgos Tsimpidis and the company Monemvasia Winery (Velies Monemvasia, +30 27320 53096, malvasiawines.gr), Malvasia has returned to its home country. Following the detailed listing of 15 local varieties, the creation of experimental seaside vineyards and participation in international conferences, the production of sweet white wine began, but also liqueurs from sun-dried wine grapes with the certification of Protected Designation of Origin. At the company’s fully-equipped winery, which is open all year round, one can try both the historic Malvasia, as well as other excellent local wines. 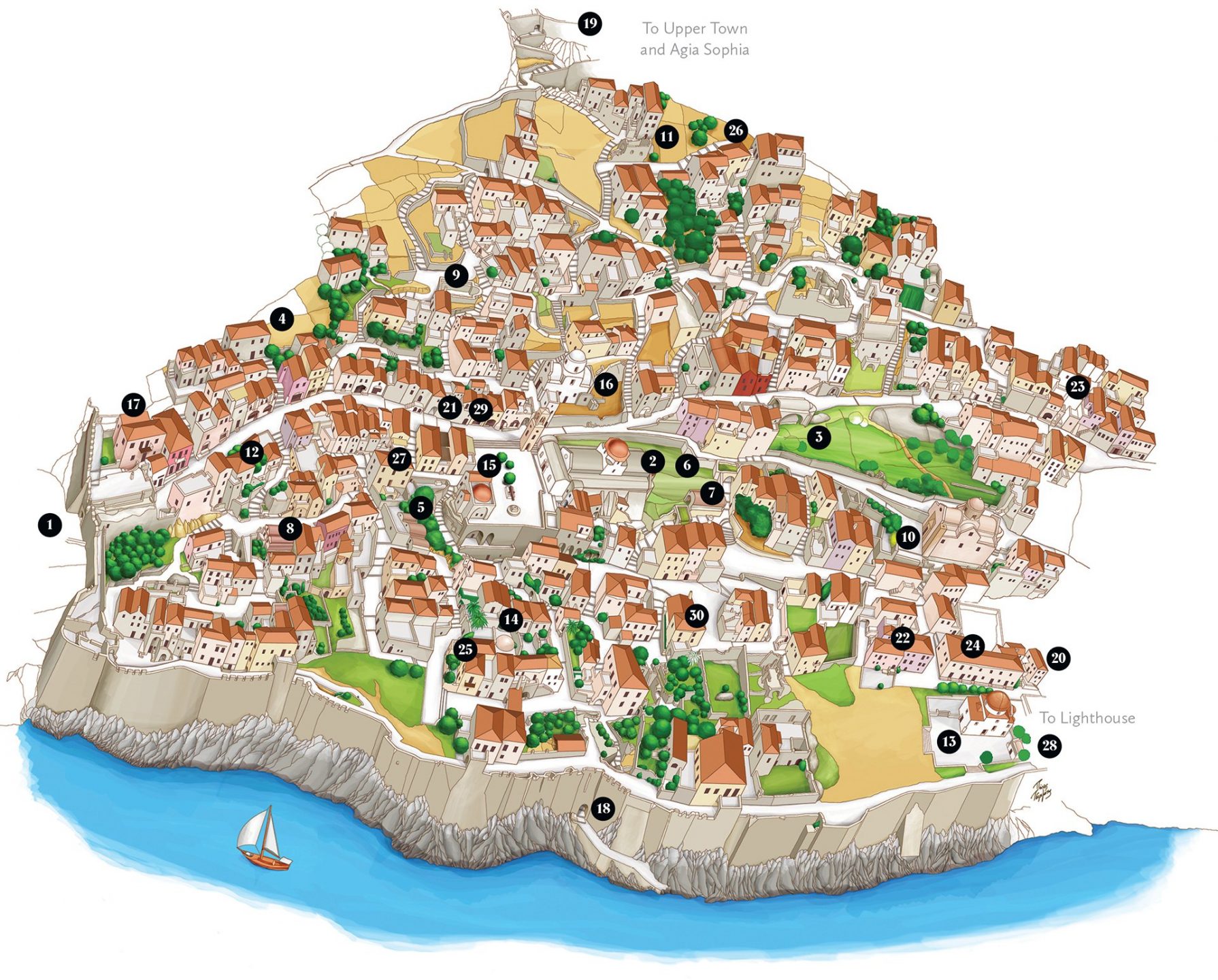 With the map in hand, climb to the top of Monemvasia, where the 12th century temple of Agia Sophia or Panaghia Odigitria stands proudly (19). Enjoy the sea view from above, and then walk amongst beautiful stone houses – like the residence of the the great Greek poet’s Yiannis Ritsos (17) – and hotels such as Theophano Art Hotel (22) and Kelia Guesthouse (24). Depending on the weather, get out of the walls for a dip in the crystal clear waters of Portello (18).
— Map illustration: Panos Tsirigotis — 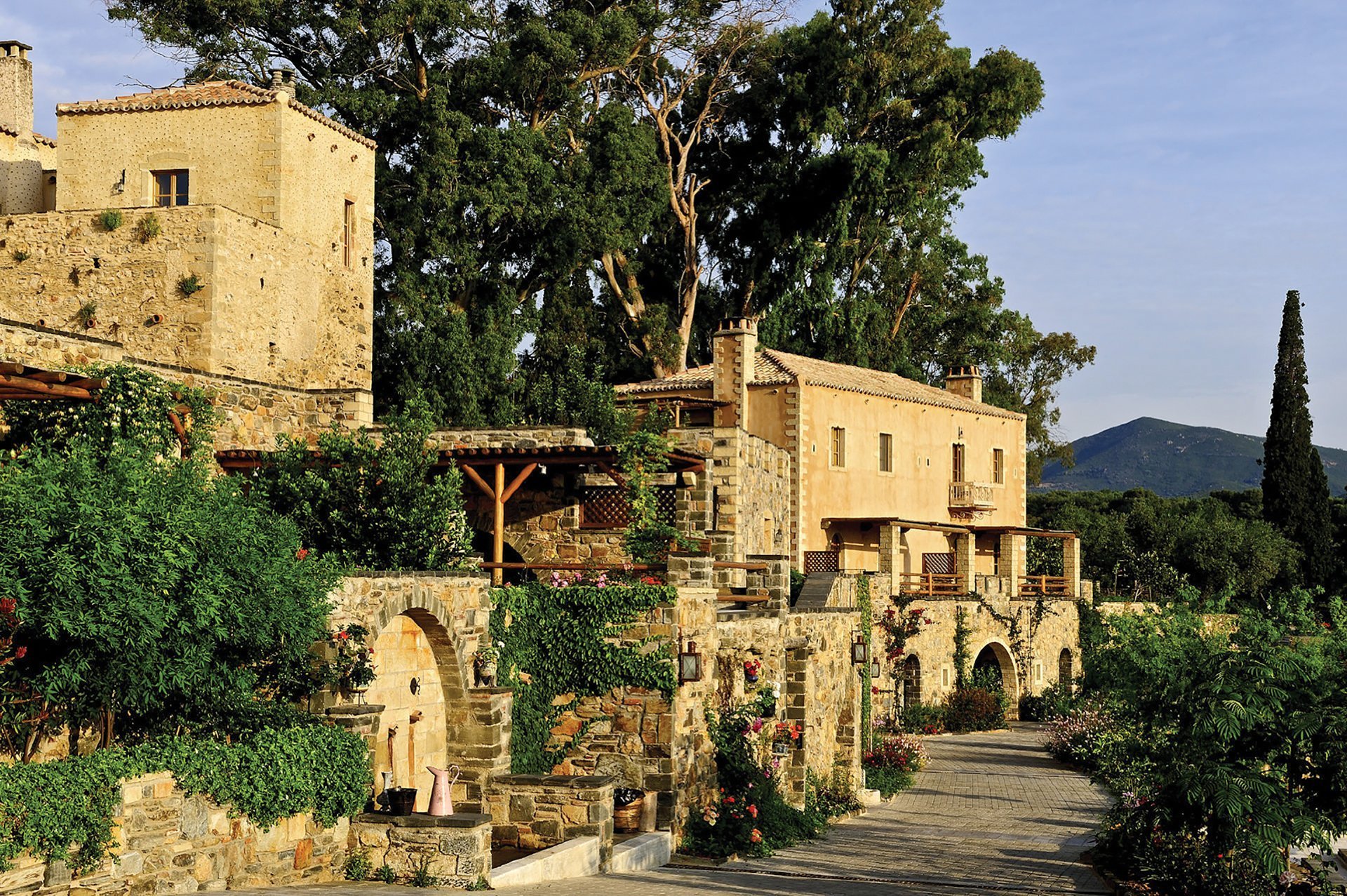 Luxury outside the walls

An amazing stately mansion combining the charm of the old with the comforts of the new. The rooms and suites will enchant you with their splendour and their history, while the residences and two magnificent villas offer privacy and modern design, which is perfectly attuned to the style of this historic building. All accommodation quarters are different, but with some common features, such as the traditional handmade lace on the walls, embossed headboards and lighting fixtures, wooden rooftops with reed interiors, luxurious marble bathrooms and traditional wooden shutters and doors. Old and new decorative design items, top quality linen and all modern comforts complete the accommodation experience. The Kinsterna Hotel is located in the Agios Stefanos area and enjoys wonderful views of the Monemvasia Castle (+30 27320 66300, www.kinsternahotel.gr). 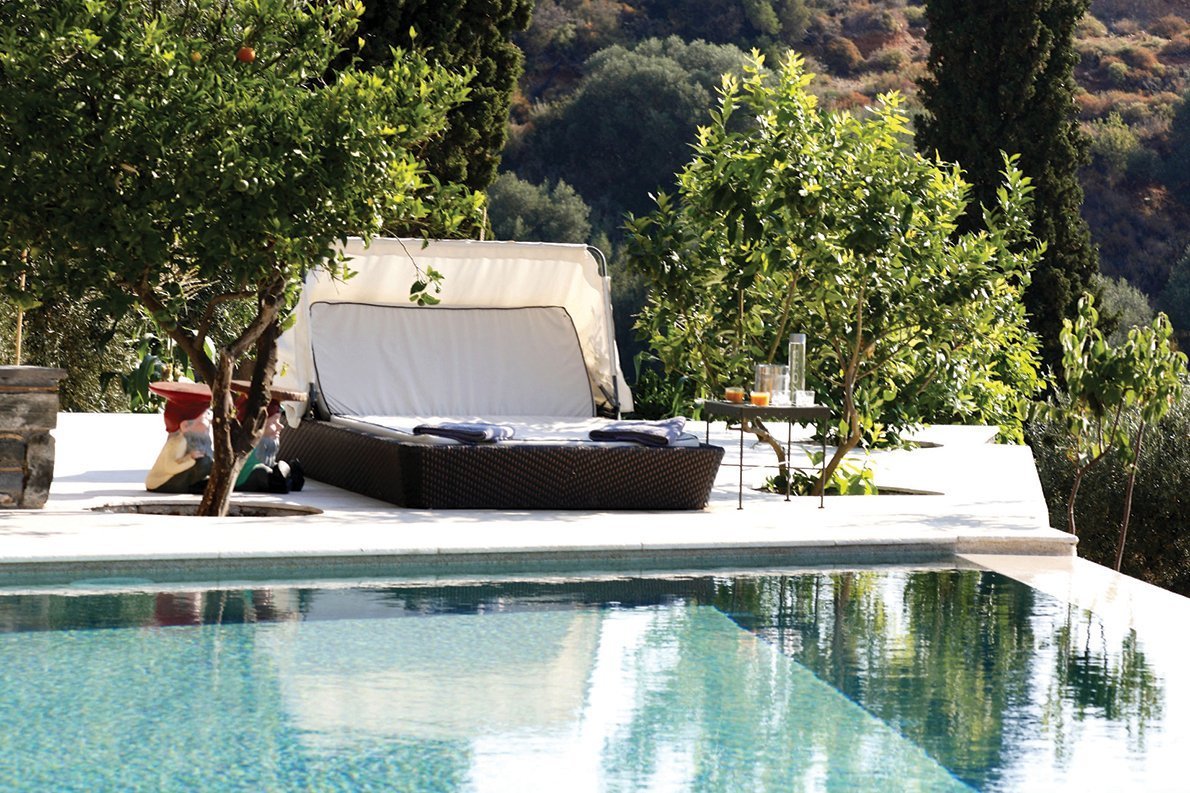 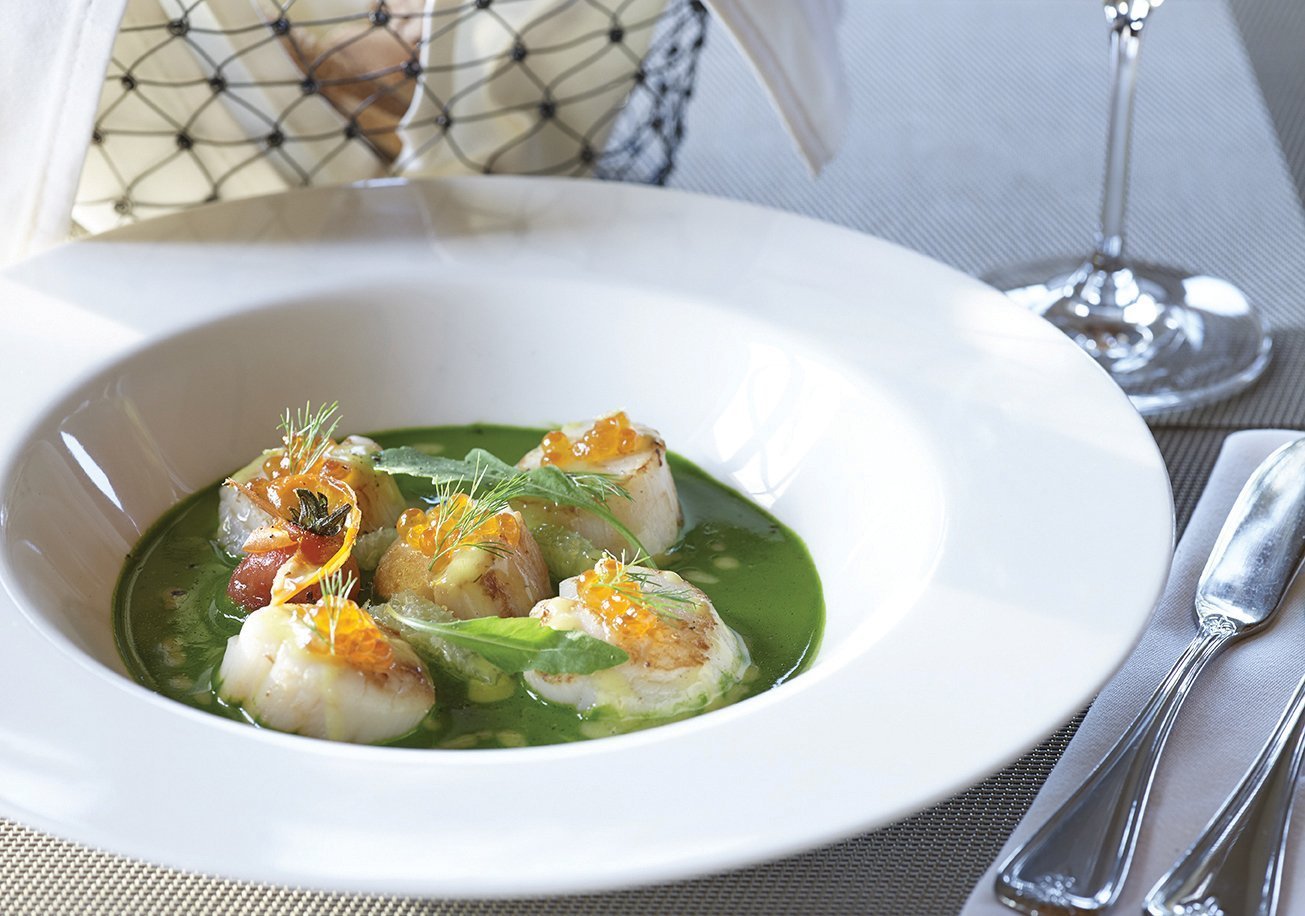 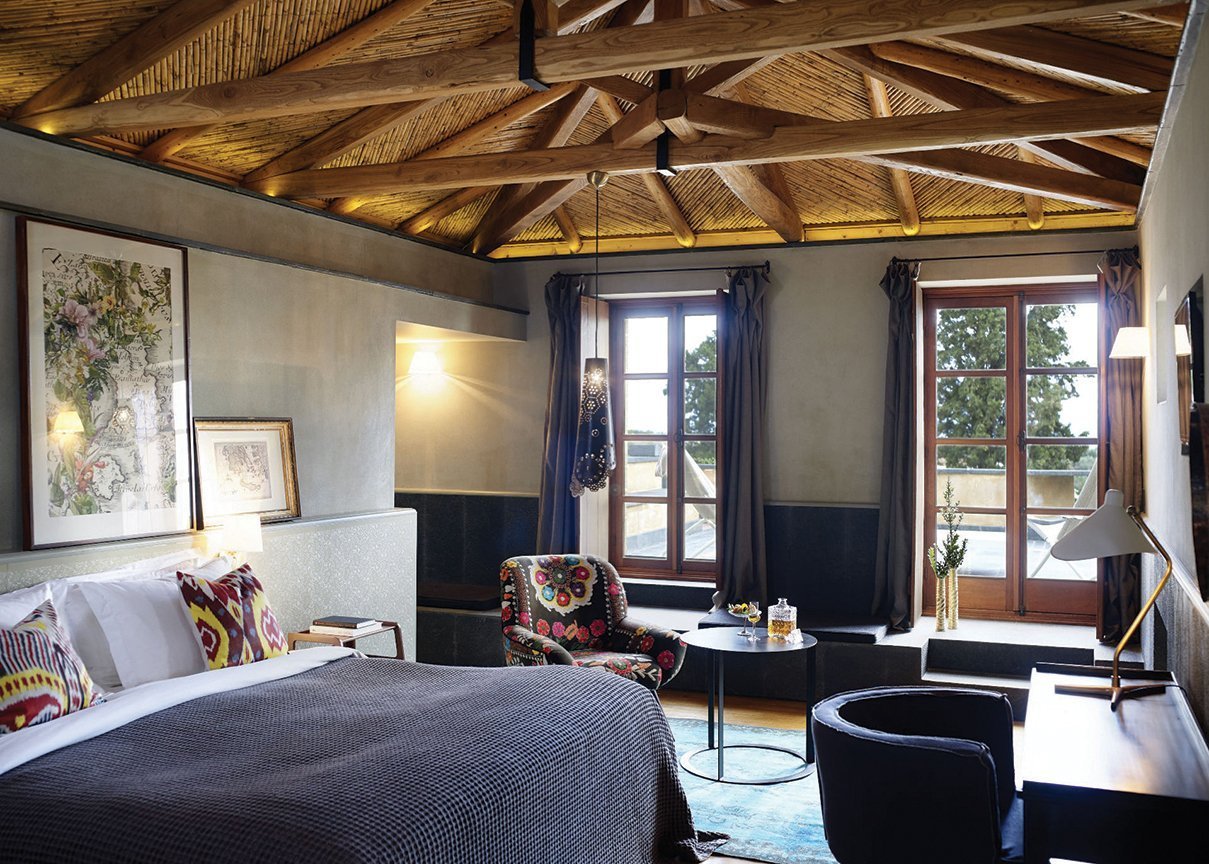 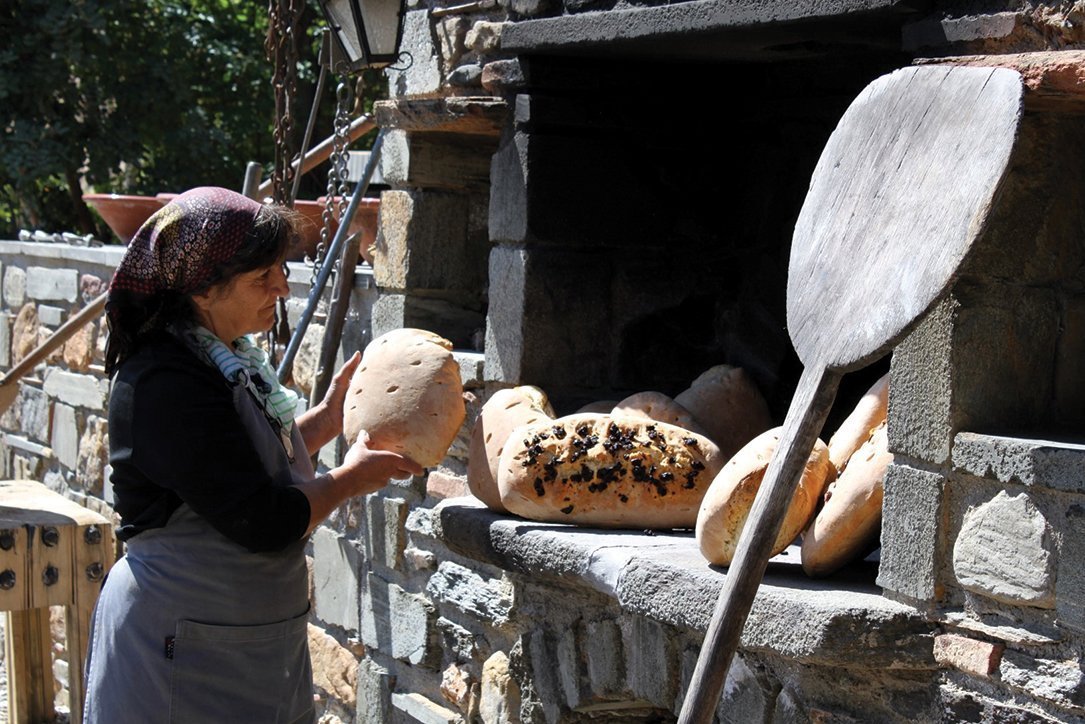