A journey to a location where the grandeur of nature blends with the tastefulness of the Epirus tradition.

A journey to a location where the grandeur of nature blends with the tastefulness of the Epirus tradition.

It is The pride of Epirus, a region of rare natural beauty protected by UNESCO. At its heart, spread out two national parks, imposing mountain peaks, magnificent canyons, and small rivers with crystalline waters. This majestic scenery is complemented by subtle man-made touches: arched bridges, modest pathways, and above all, 46 small traditional settlements with stone houses and picturesque cobbled alleys. There, the mountain breeze blends with the scents of herbs and the delicious pie aromas baked in fireplaces and wood-burning stoves. A sense of serenity, wellness, and purity is all-pervasive. 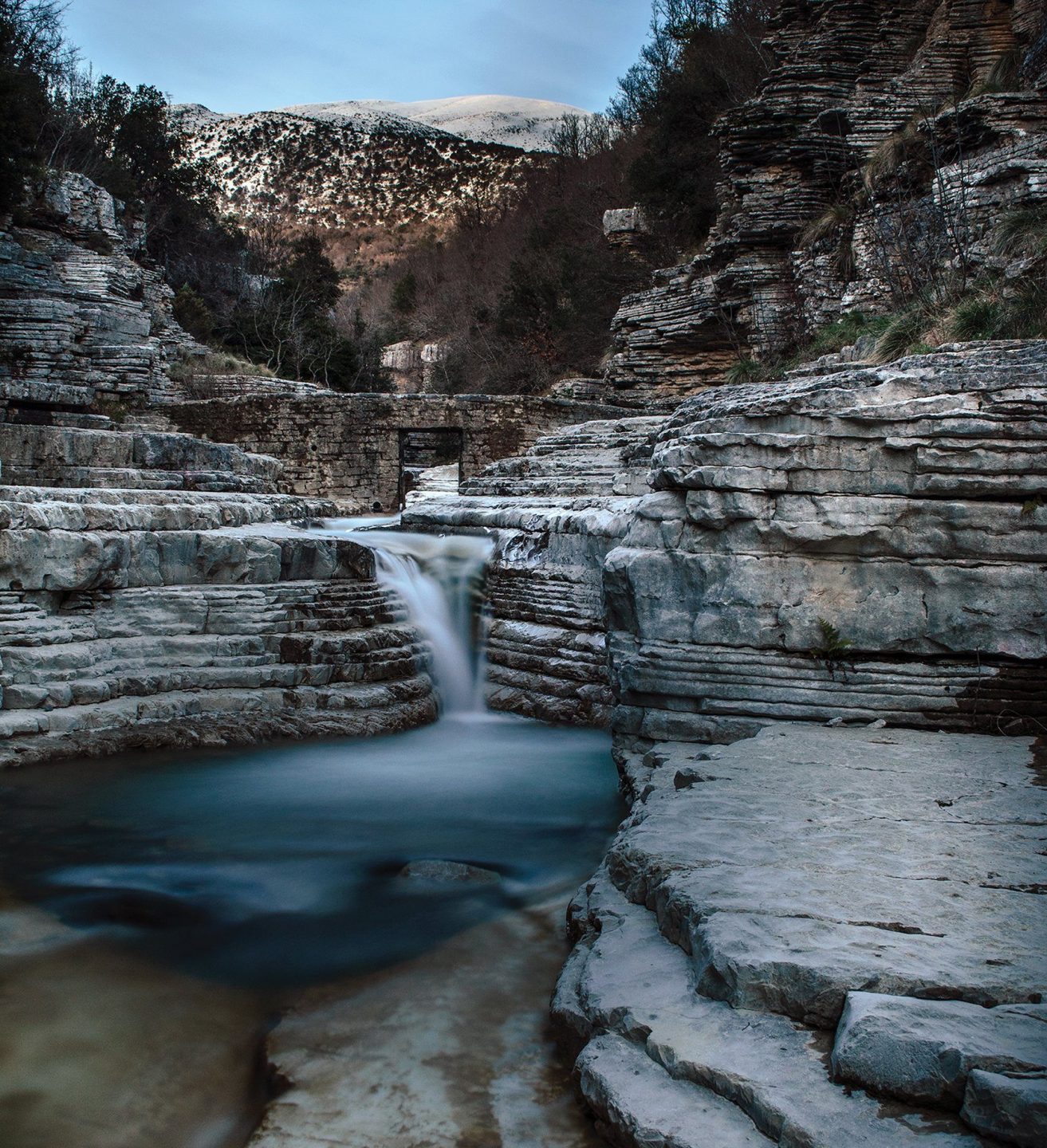 A visit to the villages of Zagori is like a free lesson in architecture; one that is functional, sleek and in complete harmony with the environment. The mostly two-storey houses were built by the old craftsmen with stone and roofed with slate. Following the natural terrain slopes are the well constructed cobbled alleys that meander between the houses, all leading to the central square. There, inhabitants of the community meet at the church, at the coffee shop, or just sit and chat under the large plane tree.

The first of the 46 villages to be developed for tourism was Megalo Papigo, with a beauty multiplied by its view towards the Astraka peak of Tymfi. Perched on the imposing mountain slopes nearby is its equally beautiful “sibling” Mikro Papigo. A walk from one village to the other is a truly rejuvenating experience. The villages of Vitsa, Aristi, Ano Pedina, Kepesovo andMonodendri have also experienced a moderate growth. The latter is found at an altitude of 1060m, almost on the cliff of the Vikos Gorge. Unique mental snapshots can be captured at Dilofo, Koukouli and in the smaller villages, many of which are now abandoned. There time seems to have come to a standstill. You can get a taste of the old Zagori at the Folklore Museum of Agapios Tolis (+30 2653071826) in the village of Kipi, where artifacts of everyday village life are exhibited.

In any part of Zagori you find yourself and look upwards, you will see Tymfi. This impressive mountain, also known as Gamila (Camel) due to its distinctive appearance, has small alpine lakes on its peaks and plateaus. The most beautiful is Drakolimni (Dragon lake) found at a 2000m altitude, home to thousands of tiny alpine newts. These amphibians resemble miniature dragons and probably take credit for its name. Drakolimni is a popular destination for climbers and frequented by hikers during the summer months. 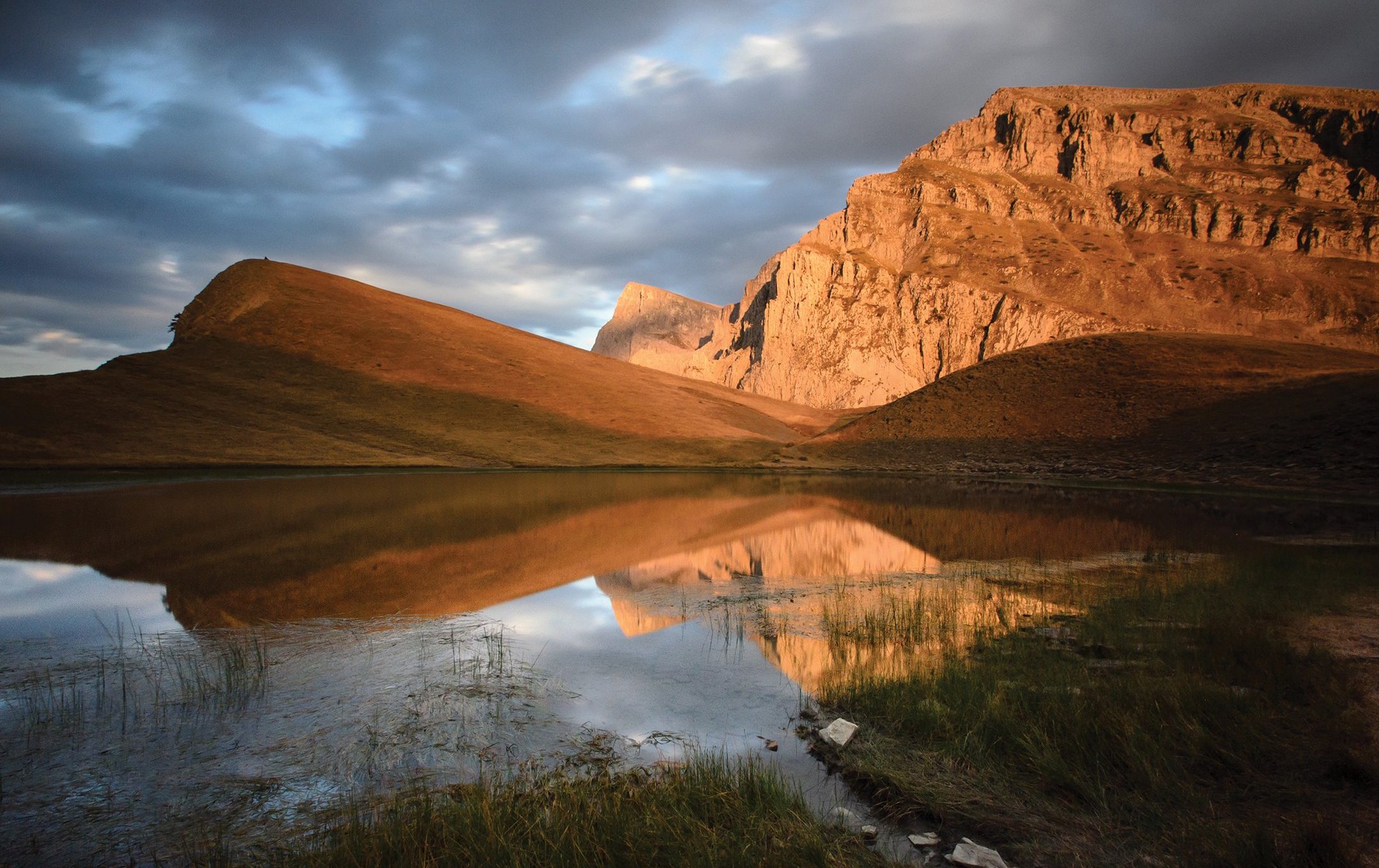 GOING UP THE MOUNTAIN STAIRWAY

Seen between the villages are the old trails, which served as the inhabitants’ only way of communication. Many are still accessible, with the most popular route being from Kepesovo to Vradeto, via the formidable Skala of Vradeto (Vradeto Stairs). An impressive technical feat from the early 18th century, which took 20 years to complete.

Words can not describe the sensation when visiting Vikos for the first time. It is one of the world’s most impressive gorges (the deepest in proportion to its width according to the Guinness Book of Records), a gigantic “cut” splitting Zagori in two. It stretches for tens of kilometres and has vertiginous cliffs as deep as a thousand metres. The small homonym river flowing through the rare plants and medicinal herbs, eventually joins other streams to form the Voidomatis river – yet another “star” of the region. Rare animals such as roe deer, bears and golden eagles find their habitat in the virgin area surrounding the crystal clear river.

Crossing the gorge takes five to six hours.However, winter crossing is very hard, so visit one of the viewpoints where you can marvel at its grandeur instead. The most accessible are Oxia and the Agia Paraskevi monastery – both close to the Monodendri village. The third and most impressive spot is Beloi (a 15 minute walk from Vradeto village).

From bridge to bridge

In the 18th century, the inhabitants of Zagori began to trade and the villages experienced economic growth, and were connected to the large European cities. However, movement of people and goods was restricted due to the rough terrain and rushing rivers. This was resolved by wealthy merchants who funded the construction of stone bridges. Dozens of bridges – named after their benefactors –, which are true works of art blend perfectly with the surroundings. Some of them rounded, others pointed, with one, two and three arches at their base. One of the most beautiful is the single-arched bridge of Noutsou-Kokkori between the villages of Dilofo and Koukouli. Built in the mid 18th century, it has also been used as a set for films and TV series. One can also easily get to the three-arched bridge of Plakida or Kontodimou (55m long) built in 1814, very close to the Kipi village. Walking around the grassy ridges of many of these monuments, one can admire their construction in detail.

Vikogiatroi (Doctors from Vikos) was a name given to the experiential doctors who would treat patients in the past with herbs collected from the Vikos Gorge. Today, the word is associated with a traditional coffee shop at the Koukouli village. The owner, Nikos Kontodimos will gladly share his knowledge of herbs while serving local liqueurs, hot drinks and his famous pies. (Traditional coffee house Vikogiatros, Koukouli, +30 6945545705). Also found at the village is the Lazaridis Folklore Museum with 1,240 different plant and herb species of the region, among other exhibits.

The Zagori experience is intensified thanks to the professionally organised activities in the heart of the national park. Depending on the season and weather, your options include rafting, canoeing and kayaking at Voidomatis, as well as hiking, mountaineering, climbing, mountain biking, archery, paragliding and 4×4 excursions to rugged areas. Equally exciting are the organised mushroom collecting excursions in autumn and in spring. The guides know every nook and cranny and will lead the mushroom hunters into the forest’s most enchanting corners.

TREKKING HELLAS | It has branches in several parts of Greece. One of the winter activities offered is snowboarding at the snowy “Livadia tou Vradetou” overlooking the Tymfi peaks. (Spyrou Lambrou 7, Ioannina, +30 2651071703, trekking.gr)
NO LIMITS | Hiking, rafting, but also traditional pie making courses. No Limits has a long history in the Zagori region and the nearby Konitsa.

ARISTI MOUNTAIN RESORT | Stone, wood, warmth and subtle ecological luxury. Created by Vasilis Iosifidis and architect Thomas Tsatsopoulos, it has received many international awards, including the World Luxury Hotel Award and the Unique Lodges of the World by National Geographic. Added for your delight is a spa and indoor pool with a large glass window to admire the view. The Salvia Restaurant serves great gastronomic delights. (Aristi, +30 2653041330, aristi.eu)
MIKRO PAPIGO 1700 | Perched on the edge of the Mikro Papigo village, in the shadow of the Astraka peak. In the interior, we find designs by leading designers (Philippe Starck, Zaha Hadid, Castiglioni), with unobstructed views of the entire area from all of its 18 rooms. The hotel, owned by Olympic track champion Kostas Kenteris, has been awarded at the World Luxury Hotel Awards 2017. (Mikro Papigo, +30 2653041179, mikropapigo.gr)
THOUKIDIDIS | Six superbly decorated rooms, true to the traditional Zagori style. The lodge’s restaurant has delicious breakfast and meals. The family also runs the small “Sterna” coffee shop in the village square, serving local sweets under the perennial plane tree. (Kapesovo, +30 6979983798, thoukididis.gr)

Food in Zagori is just like the region itself: a pure and hearty experience, full of surprises. The traditional recipes are based on products from the region: meat and dairy products, wild greens and herbs, forest fruit and cereal grains cultivated in the small plateaus. Just like in the whole of Epirus, the pies really stand out, which can be had anytime of the day and on any occasion. There are dozens of variations, the best known being the kasopita (flour dough pie with oil, butter, egg and cheese) and the batsaria (a mix of wild greens and feta with corn flour porridge). Meat dominates the main dishes mostly with goat, lamb and veal, often combined with mushrooms, chestnuts and forest fruit, served with pasta, or potatoes. The meal is accompanied by the wines from Zitsa (an area close to Ioannina) and of course, the traditional tsipouro.

They say that it is easier to find… the sea up in Zagori, than it is to be disappointed with the food. So, the following restaurant list is merely indicative:
SALVIA (Aristi +30 2653041330, www.aristi.gr). The Aristi Mountain Resort restaurant. Traditional delicacies with pure ingredients and contemporary creative touches. Free-range meats, local cheeses and a rich cellar. All vegetables come from the hotel’s organic greenhouse.
KANELA KAI GARYFALLO (Vitsa, +30 2653071671, kanela-garyfallo.gr). Welcome to mushroom heaven. Drawing inspiration from the nature of Epirus, Vassilis Koutsoupas (environmentalist, mycologist and chef) transforms traditional dishes creating new compositions where mushrooms play the starring role – “the forest’s treasure”, as he calls it.
DIAS (Mikro Papigo +30 26530 41257). Situated at the start of the most popular hiking route. This fact, coupled with their reputable chicken soup, has made it a favourite spot for climbers and hikers.
PITA TIS KIKITSAS (Monodendri, +30 2653071340). Founded in 1958 at the central square of Monodendri. Apart from the renowned pies made with an old recipe by granny Kikitsa, it is also notable for its konotsouvli (large meat pieces cooked on a low fire in a small spit).

We are very grateful to Petros Bletsas (@pepemplts) and Drosoula Tsoumani (@drotsoum) for the photography and for allowing us to use their material. For even more travel photos from the Epirus region, visit their Instagram accounts.