This cosmopolitan and exceptionally stylish designer beach restaurant that opened last summer, attracted the entire cosmopolitan Athenian crowd at the Zoska bay, and it is truly the summer place to be. This idyllic boho setting, which spreads over different levels -from the beach to a beautiful main restaurant and a stylish lounge bar-, has interesting options for all hours. In the menu you will find both seafood and meat options, modern, but not too composed, with meticulous executions and great taste. (Zoska Bay, Thespidos Str., Vouliagmeni, +30 210 8963.309, krabo.gr) 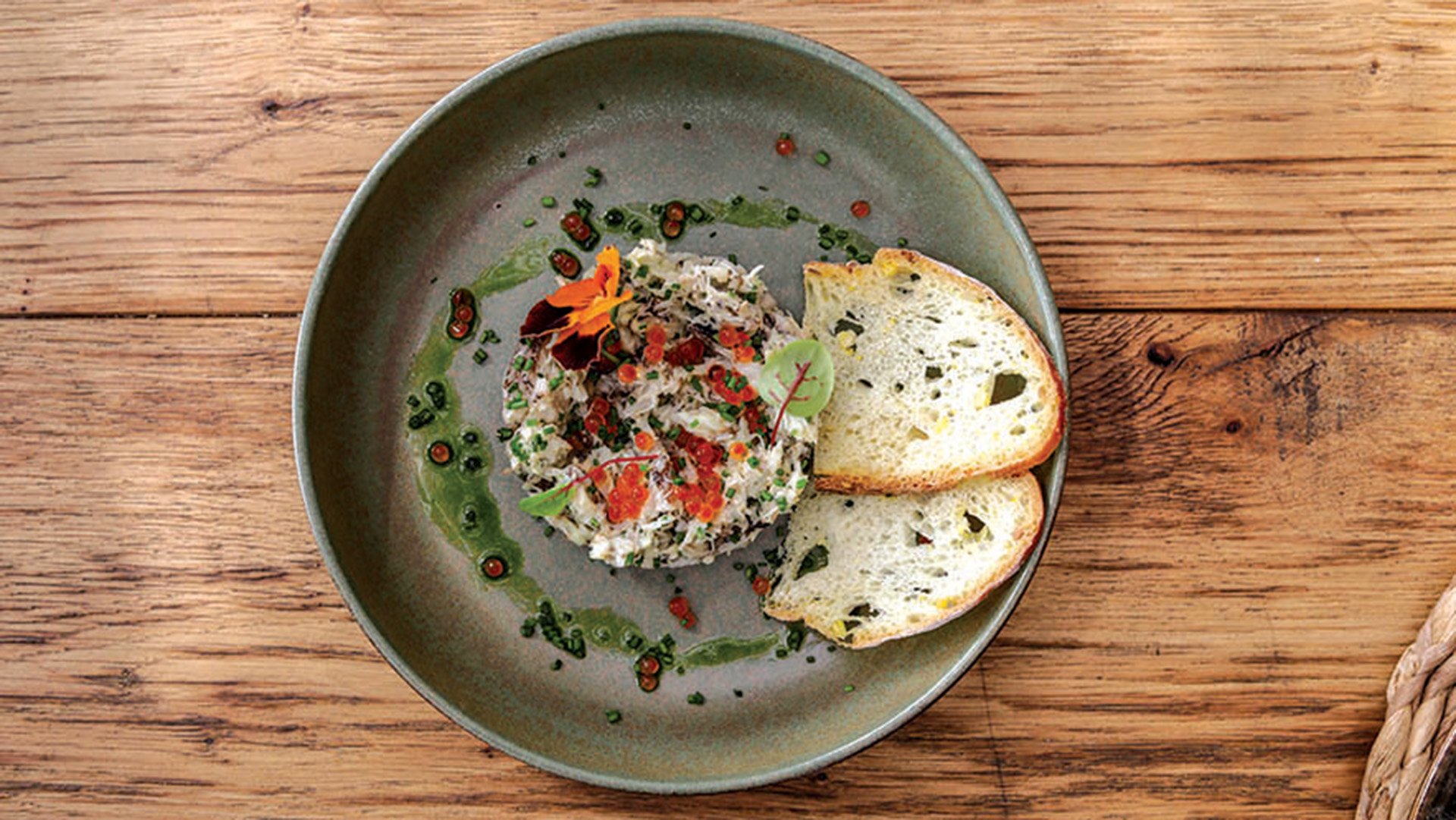 You won’t see the friendly sandy beach behind the square of Niriidon from the road, but there are good reasons to discover it with a little help from the GPS. Totally summery, and a setting which includes everything from diving and leisurely relaxation on the sun  loungers, to refreshing salads, fried calamari, souvlaki and ice-cold beer, or refreshing wine at the restaurant’s wooden tables. (Vakchou, Vouliagmeni, +30 210 9670.096, +30 697 8154.415, zen-beach.gr) 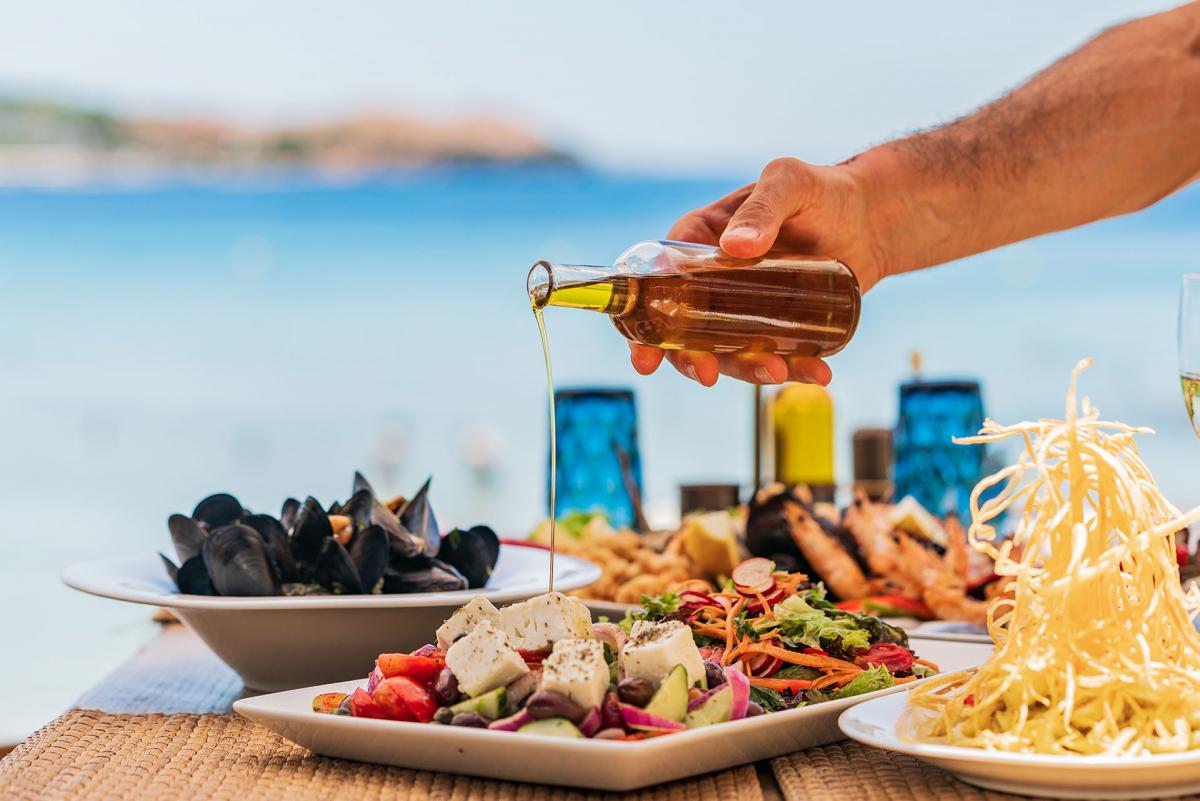 A meeting point for domestic and international personalities of the political, financial and artistic world, Asteras Vouliagmenis has been a landmark destination of the Athenian Riviera since the 1960s: the emblematic hotel complex at the pine-clad Lemos peninsula has hosted celebrities from the Beatles, Brigitte Bardot, Aristotle Onassis and Jimmy Carter to Margaret Thatcher, Isabella Rossellini and Barack Obama. Found here since 2008, is the Matsuhisa Athens – the sushi and Japanese-Peruvian fusion of Nobu, having as its side-dish a wonderful terrace surrounded by the sea and an impressive bar. This year however, as this luxury resort enters a new era as the Four Seasons Astir Palace Hotel Athens, it now adds to its gastronomic portfolio the Greek restaurant Pelagos emphasising on fish, the Italian Mercato, the cosmopolitan brasserie Avra Lounge & Terrace, the Latin American Helios and Taverna 37. Also renewed for the summer is the famous and synonymous with the socialite Athenian beach life Astir Beach, with a cosmopolitan aura, comfortable daybeds under the shade of the new stylish umbrellas and two all-day restaurants, the 40Forty with an interesting cuisine that combines casual and sophisticated, and the Nice n easy Seaside with its Mediterranean fusion cuisine. Amidst them is the easy-going Astir beach bar with its white rope curtains, resembling a classy… Bedouin tent with signature cocktails, a shisha bar and alternating international guest djs on the decks, promising a luxurious and highly up-tempo summer by the sea. (Apollonos 40, Vouliagmeni, +30 210 8901.041, fourseasons.com/athens, astir.gr) 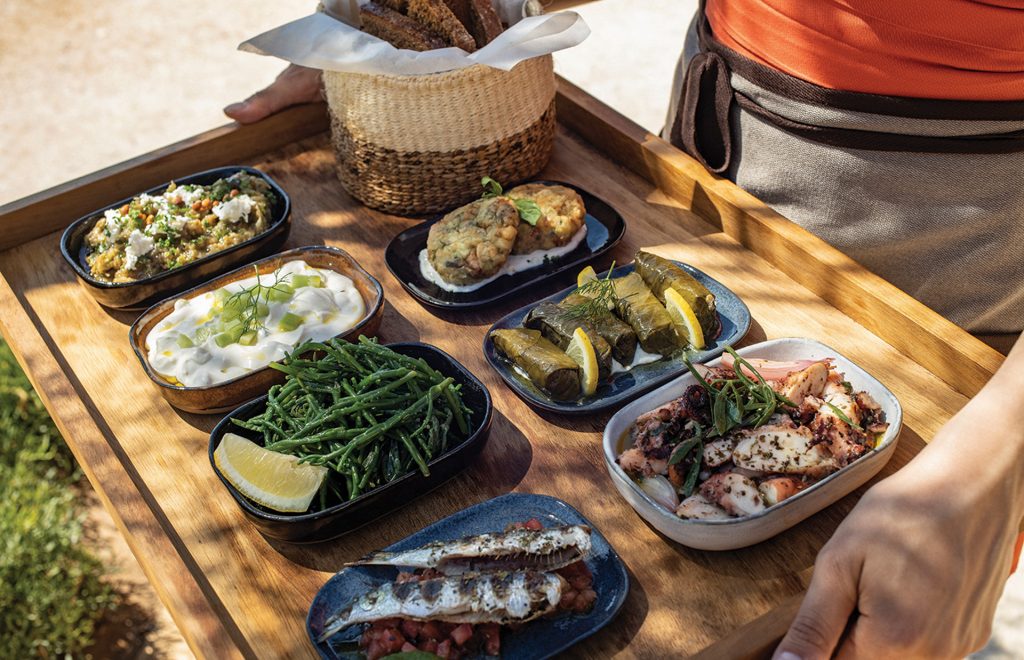 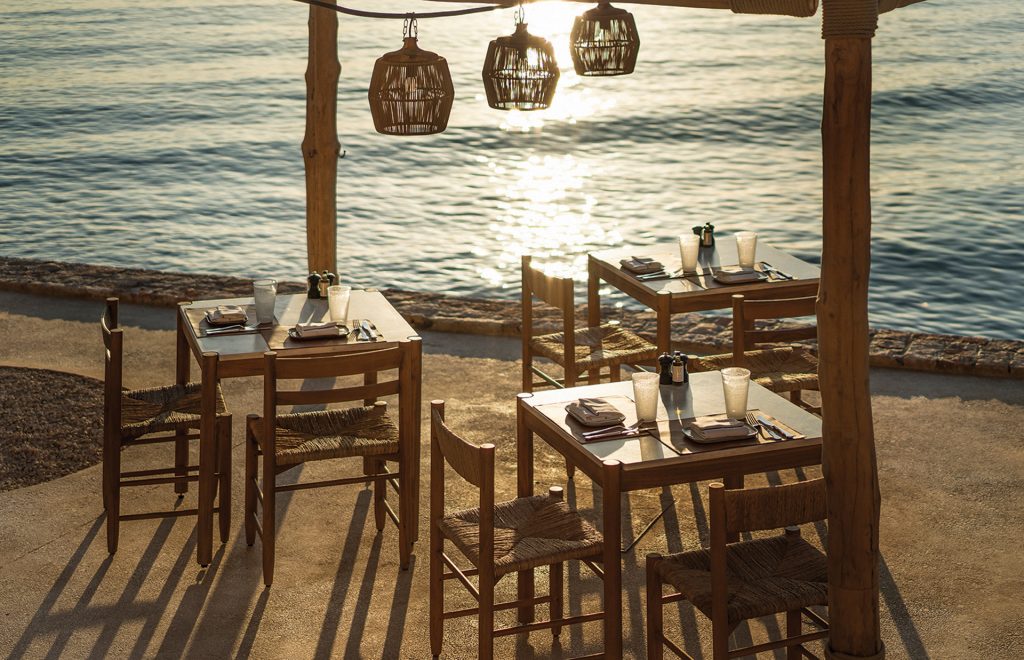 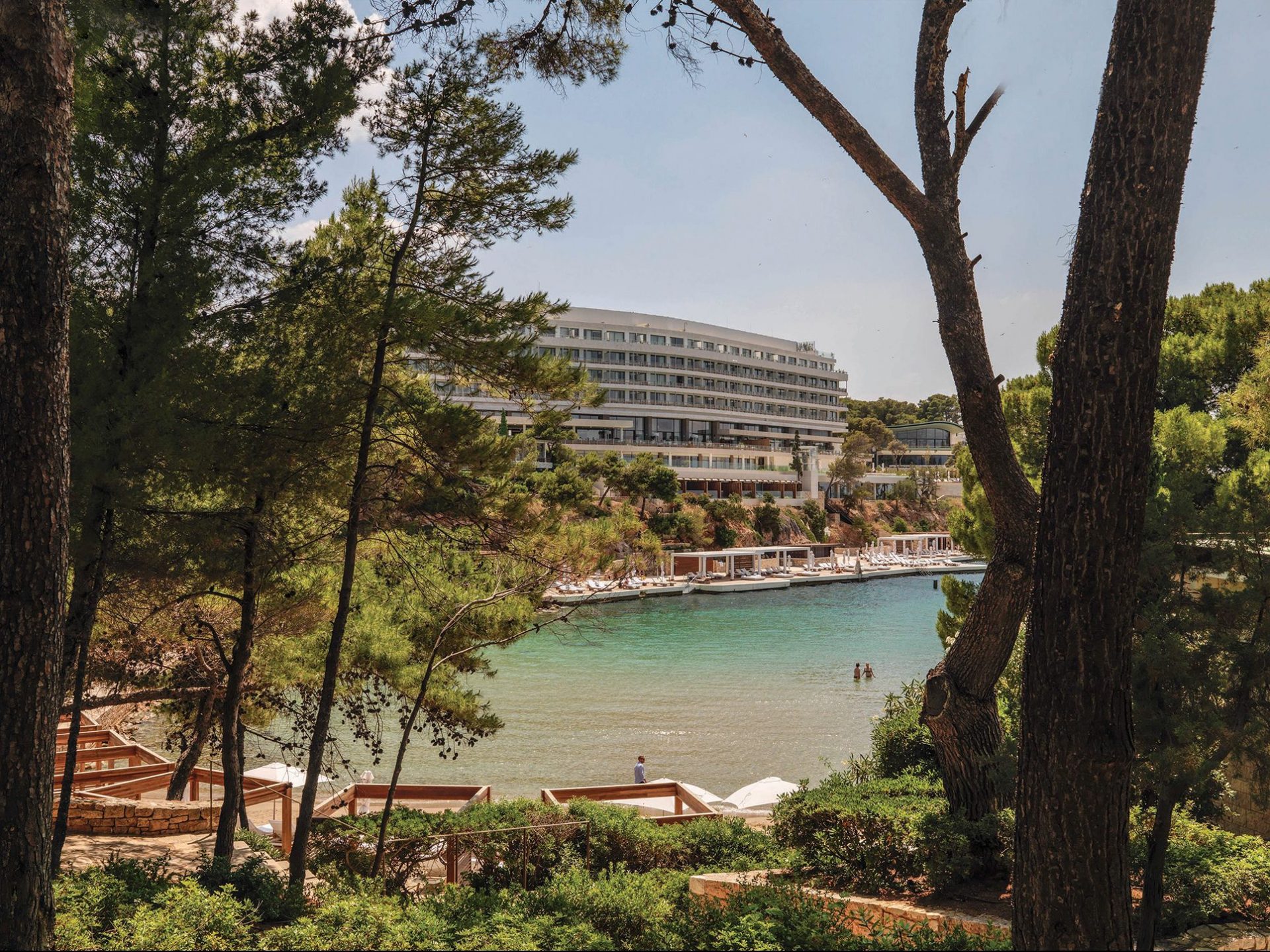 The sunset is truly magical at this privileged, pine-covered veranda overlooking the bay of Asteras. The cuisine of this classic, most luxurious restaurant with a Mediterranean flair offers dishes such as crawfish risotto, shrimp linguine, monkfish meuniere and fresh grilled fish, as well as sushi. (Apollonos 28, Vouliagmeni, +30 210 8963.747,  ithakirestaurantbar.gr) 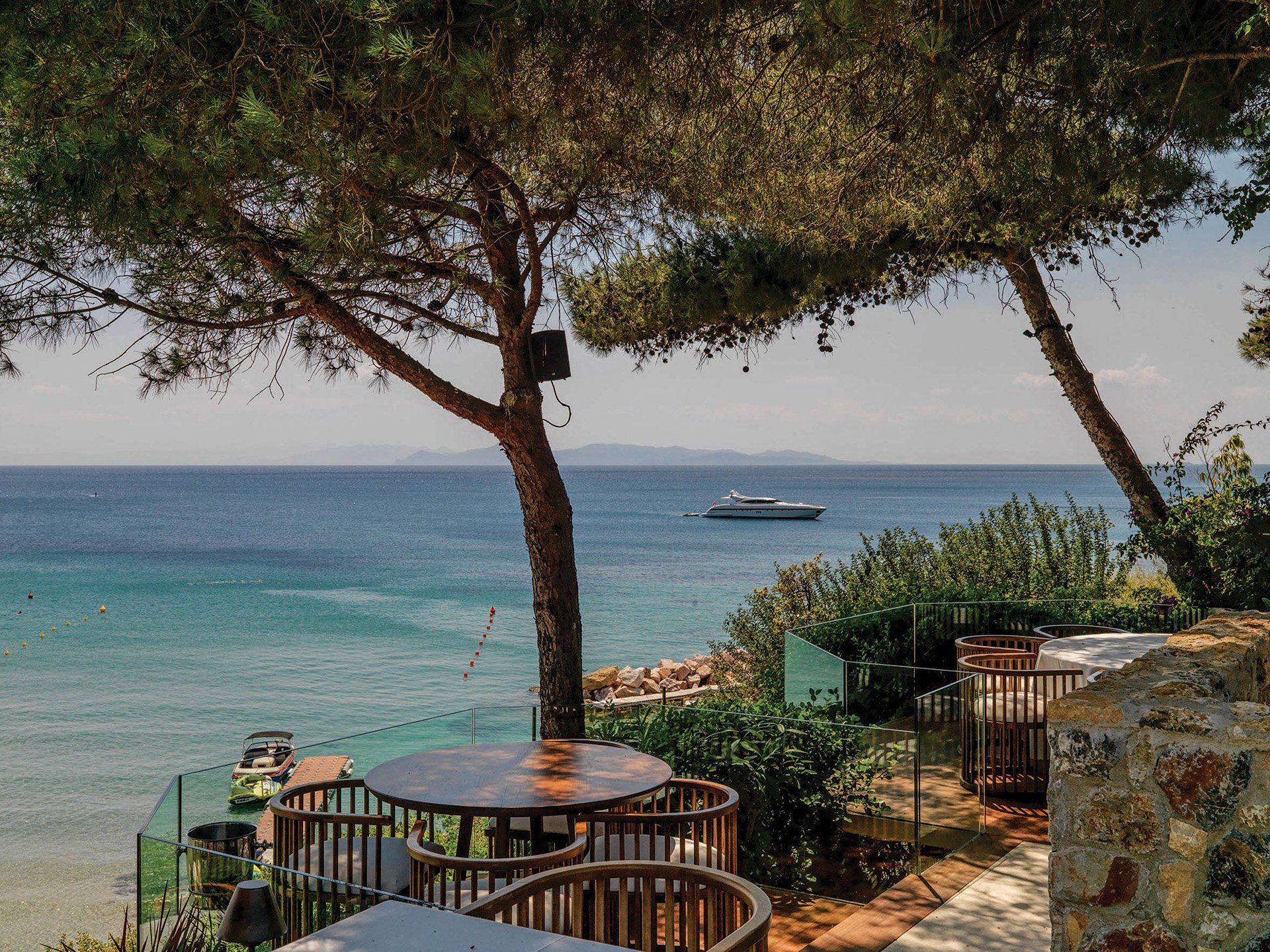 It is about a 30- minute drive from the city centre to get to this bar-restaurant that is perched over the sea, which for years has been a milestone of the Athenian Riviera. The location is fabulous, the decoration stylishly island-like, the cuisine of executive chef Nikos Skliras combines Mediterranean and Far East elements (see the sushi section), and the menu’s front cover was designed by the Oscar-winning artist Vasilis Fotopoulos. This cosmopolitan mix is supplemented with a strong dose of fine drinking by the talented bartender Mirsini Spaneli and international guest DJs on the decks – this year including names like Tale of Us, Lost Frequencies, Sunnery James & Ryan Marciano, Merk & Kremont and Roger Sanchez. Here, you move your body on the dance floor while gazing at the moon shimmering on the water. (27th km of Athens-Sounio Ave., Varkiza, +30 210 9653.563, +30 210 9653.564, +30 697 5265.836, islandclubrestaurant.gr) 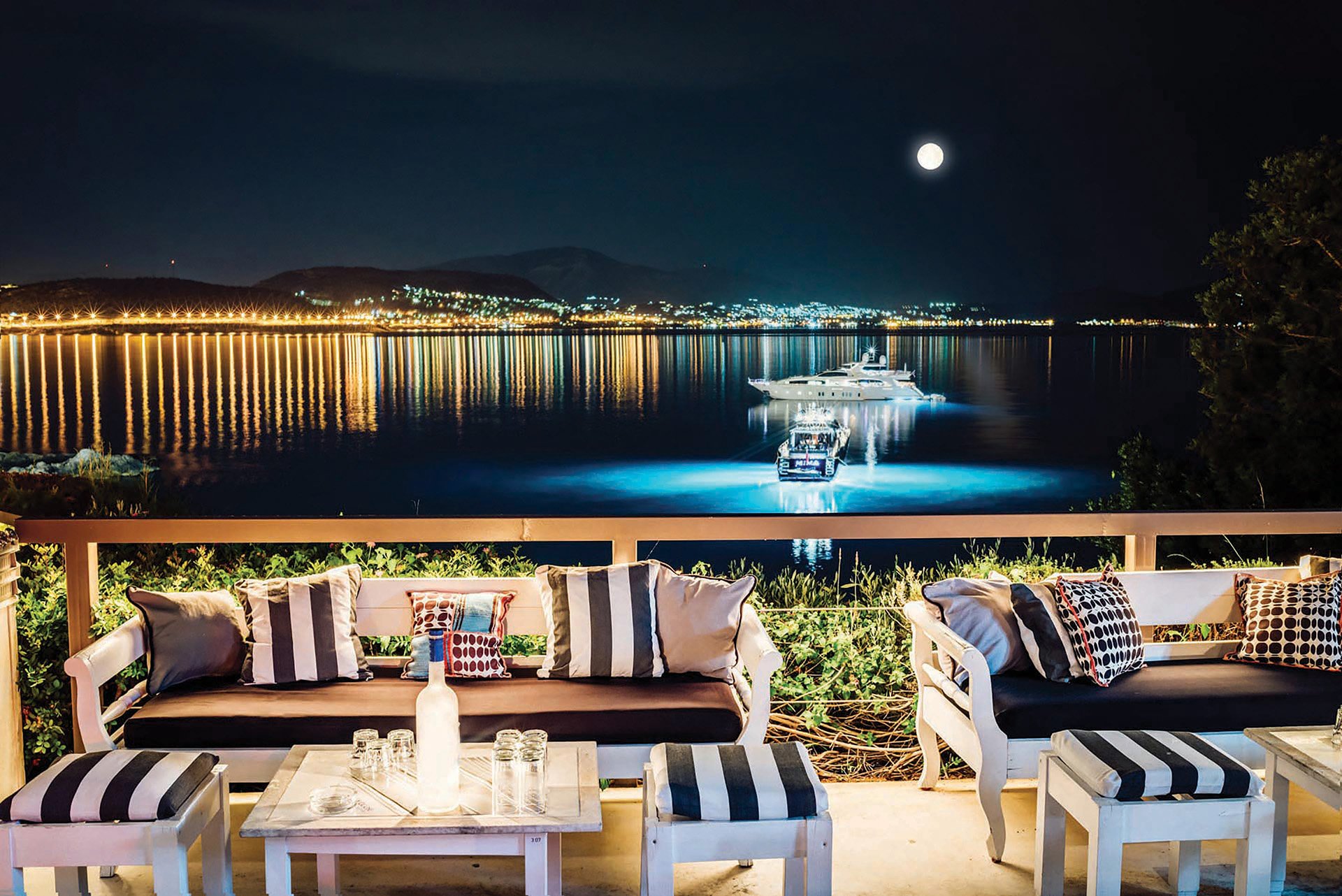 A landmark patisserie in the vicinity and a hangout for prominent Athenians who would head down south with a craving for… chocolate. It is half a century old and still serves the famous “Chicago” ice cream, which owes its reputation to the whole of the Attica basin, a fantastic fluffy mille feuille – also a must – and fresh “pontikakia” chocolates for the old school sweet lovers. (Agiou Panteleimonos 15, Vouliagmeni, +30 210 8961.214) 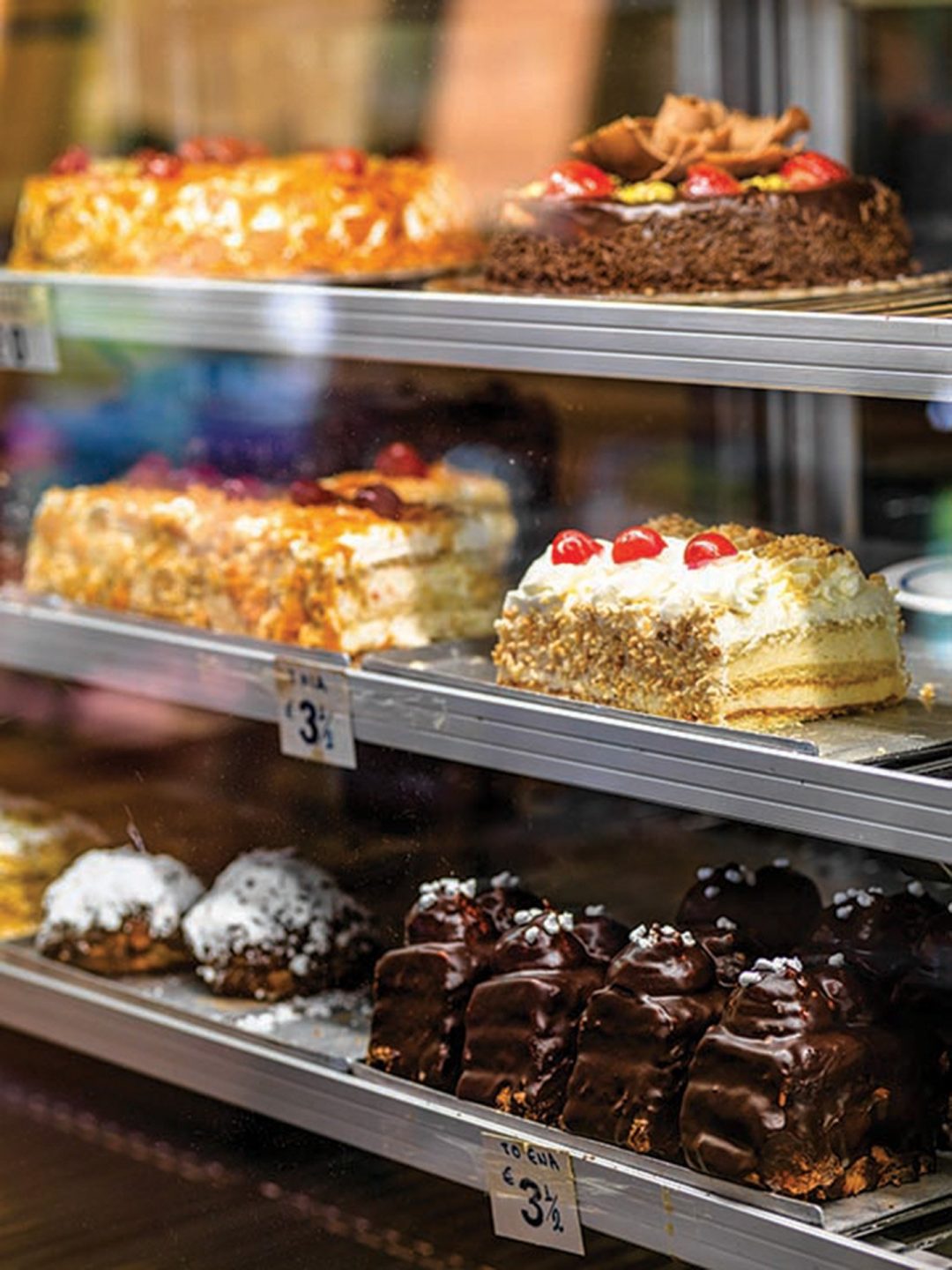 A family taverna in Vouliagmeni with exceptional home cooked meals – arakas peas cooked with olive oil and tomato, yuvarlakia, mousaka, pastitsio and amazing veal in red sauce with homemade fried potatoes. A regular spot since 1961 for locals and for visitors wishing to try the homely Greek cuisine. In the evenings, when cooked meals are finished, options are limited to grilled meat, good fish and seafood found in the menu. (Ermou 2, Vouliagmeni, +30 210 8960.591) 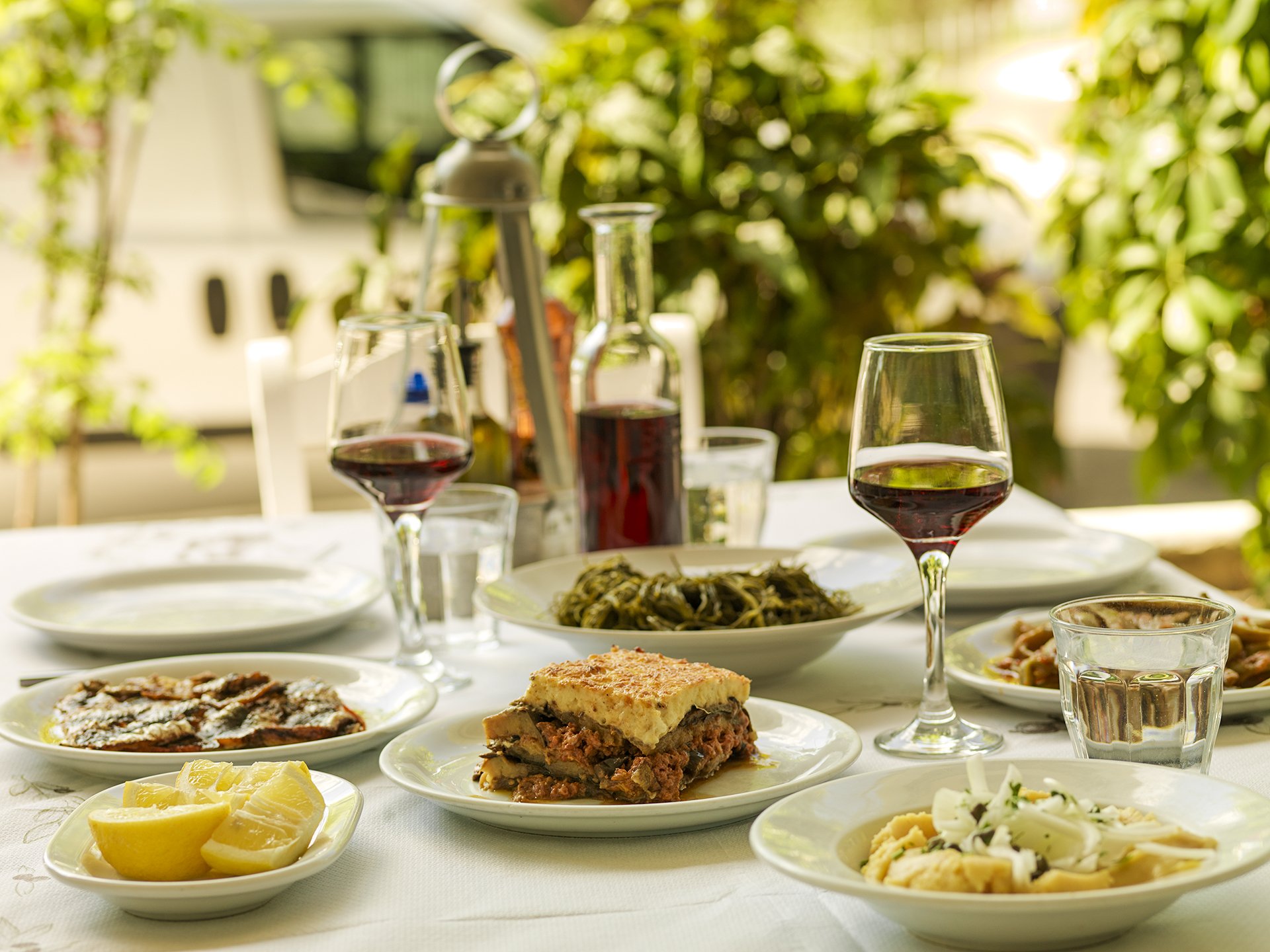 The charming restaurant of the Divani Apollon Palace & Thalasso hotel is ideal for anyone wanting to romance, holding the hand of someone special. Sitting at its white covered tables that spread over a sea pier, you will enjoy Mediterranean dishes with a cosmopolitan touch that draw inspiration and material from the sea – from a white tarama mousse with botargo powder and fried onion chips and ceviche shrimp with coriander, chili and avocado, to fresh fish cooked to perfection. Their updated wine list is a worthy accompaniment. (Agiou Nikolaou 10, Vouliagmeni, +30 210 8911.100, divaniapollonhotel.com) 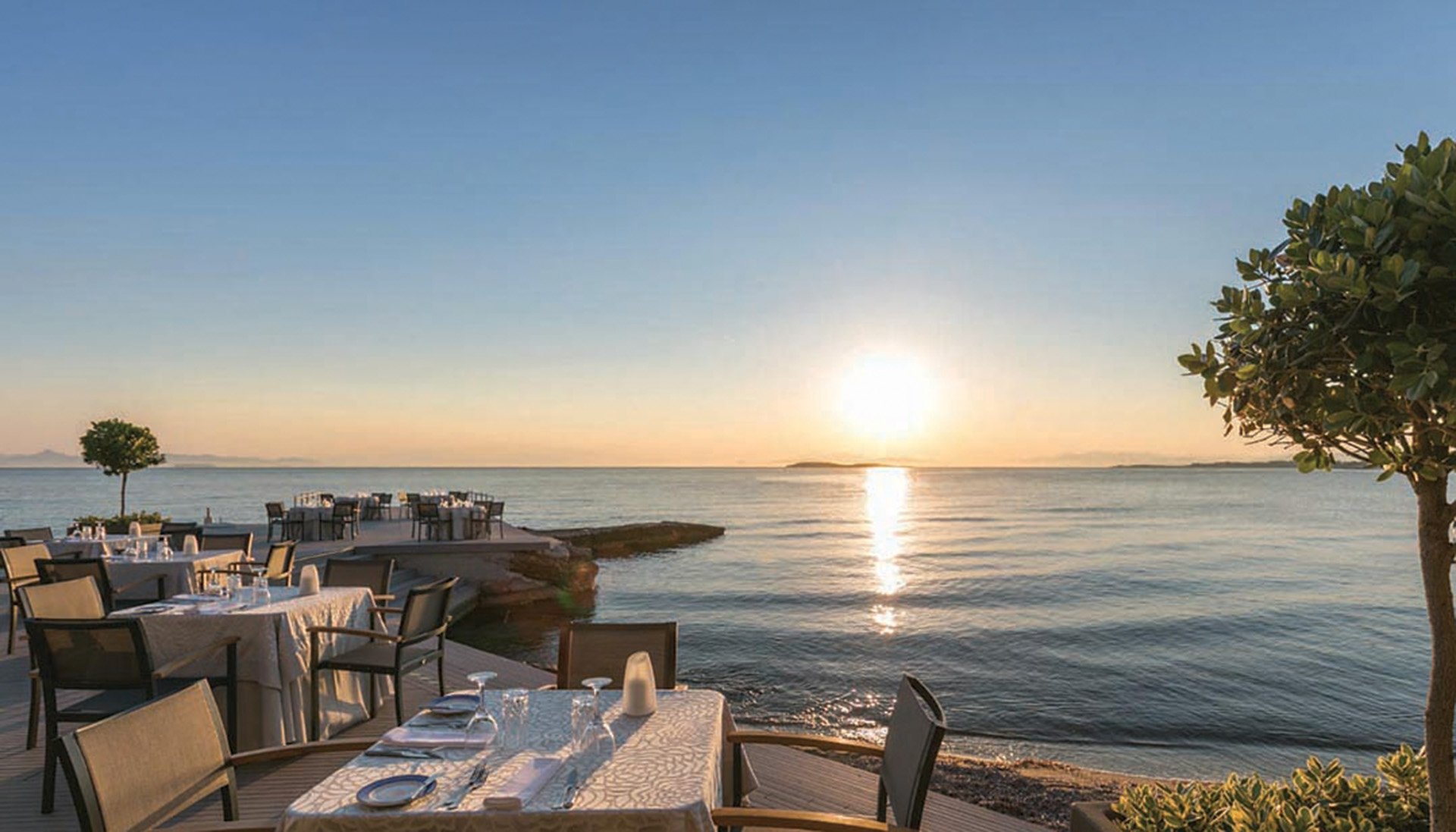 A fine restaurant right on the seaside holding since the distant 1924 – a local fishermen’s haunt at the time -, is now run by the family’s third generation and carries on the tradition of seafood cuisine, embellishing the classics with more modern dishes. (Iliou 21 & Selinis, Kavouri, +30 210 8963.480, garbi.gr)

In this restaurant of the Vouliagmeni bay, your eyes are drawn by the deep blue sea, as the cuisine of Giorgos Oikonomidis mixes Mediterranean and Japanese elements, starting with cool and light tataki and carpaccio, and moving on to more intriguing dishes. (Poseidonos Ave. 4, Vouliagmeni, +30 210 9671.778) 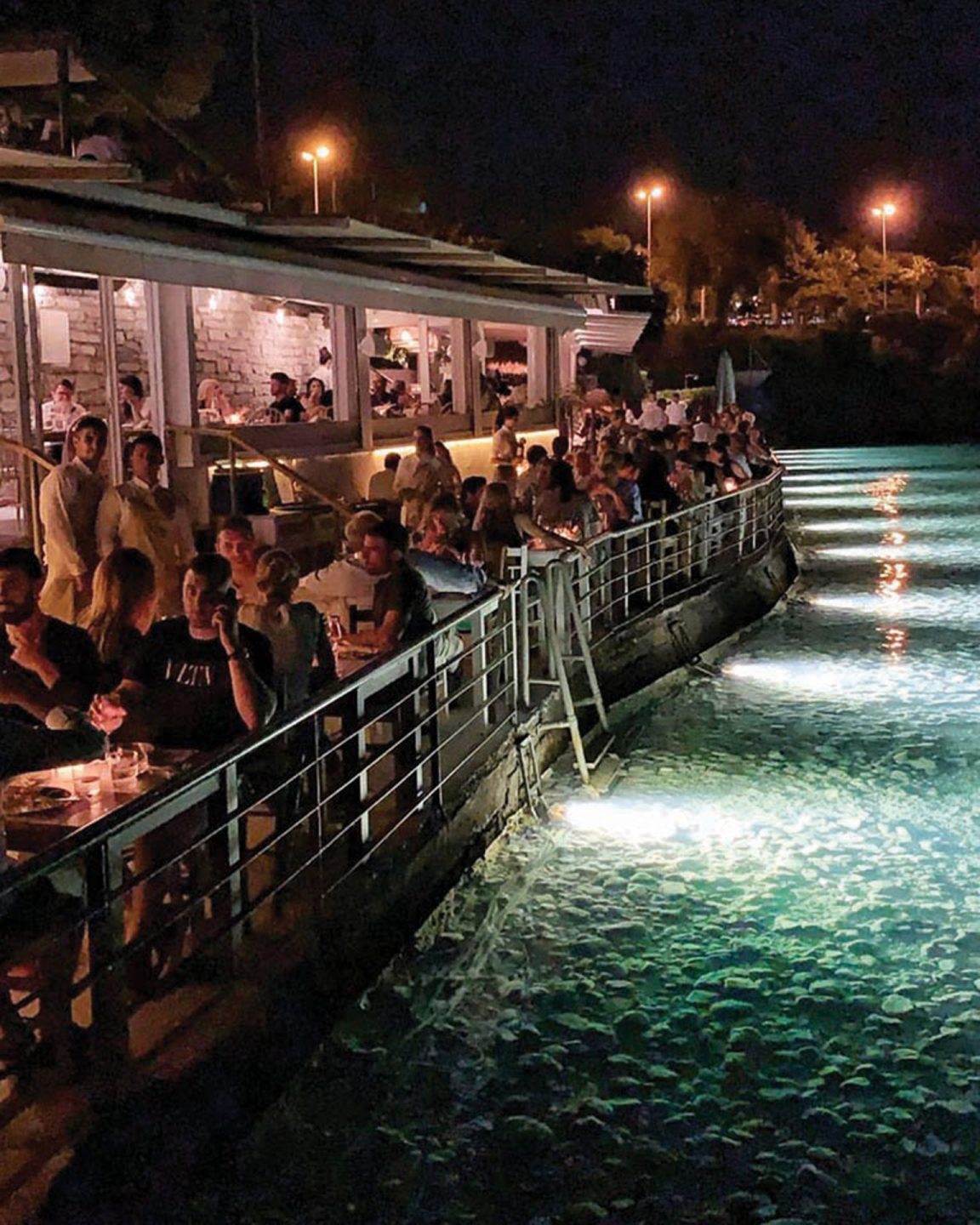 Charming new scenarios with that particular old-school allure that keeps us looking back, now combined with new ideas.