Arriving in Samos, one of the largest and most beautiful islands of the Aegean known as the homeland of Pythagoras and the goddess Hera, you will find the United Winemaking Agricultural Cooperative of Samos (UWC SAMOS) with two major winemaking facilities in Malagari and Karlovasi, two of the country’s largest wineries. All the producers of the island work as a group, supplying the Union with grapes of the Muscat of Samos variety, to be followed by the meticulous grape sorting, as required for the preservation of wine quality. Operating at the main entrance of the Malagari winery, is the Samos Wine Museum with plenty of interesting information about the history of the region and the local wine. All the wines are naturally sweet from Muscat with a rich body and aromas of honey, thyme and spring flowers and a long aftertaste. I strongly recommend you try them all, with a slight preference in Anthemis, which I personally found remarkable.

Known for its mineral, high acidity, rich body and high quality naturally sun-dried Vinsanto wines, the Santorini Assyrtiko is by far the most popular Greek variety worldwide. Also cultivated on the island is the local variety Mavrotragano, which produces robust and quite strong red wines, with extra mineral in their taste. The Venetsanos winery was built in 1949 on the edge of the Caldera, above the Athinios bay, making it the first industrial winery in Santorini and in 1967 it pioneered in the process of wine bottling. The winery has four underground levels, and as a result, every stage of production and the winemaking process flows naturally without the need for mechanical devices. It can be visited daily and it is a place that you should definitely see if you find yourself on the island.

The wine production of Paros dates back to about 2500 BC. The main varieties cultivated here are the Monemvasia, a white variety originating from the homonymous castle-town in the Peloponnese, and the Mandilaria, or Mandilari, which makes up the local red variety of the Aegean islands. The Moraitis Winery is run by the family’s fourth generation and produces 11 different labels with two that stand out: the white from Monemvasia and a red from Mandilaria-Monemvasia named Paros (Protected Designation of Origin). The white wine is rich in flower aromas, with a moderate body and a crisp aftertaste. The red has fruit and spice aromas, a rich body and rather good aftertaste. The cultivation of the winery is half privately owned, organic with 80-year old vineyards. Grapes however, are also bought from other viticulturists on the island in order to meet demand. You can visit the winery which has been modernized, preserving the traditional features and its old equipment as a historical site.

Kefalonia, the largest and most mountainous island of the Ionian Sea, has been producing wine since the Medieval times, when the island was part of the Byzantine Empire. Visit the Gentilini Winery, one of the island’s oldest wineries that produces approximately 80,000 bottles a year. You can visit it all year round, and its primary cultivation is the Robola and Mavrodaphne, which comprise the island’s main local varieties. The winery’s vineyards, as well as the entire island’s vineyards, spread across a rocky terrain with poor soil, so the Robola has subtle flower aromas and potent minerals, a rich body and sharp acidity. Mavrodaphne has dense aromas of fruits and minerals, an intense body and rich tannins. Two wines worth a try are the Gentilini Robola (dry, mild, white) and the Gentilini Eclipse (dry, mild, red from Mavrodaphne). 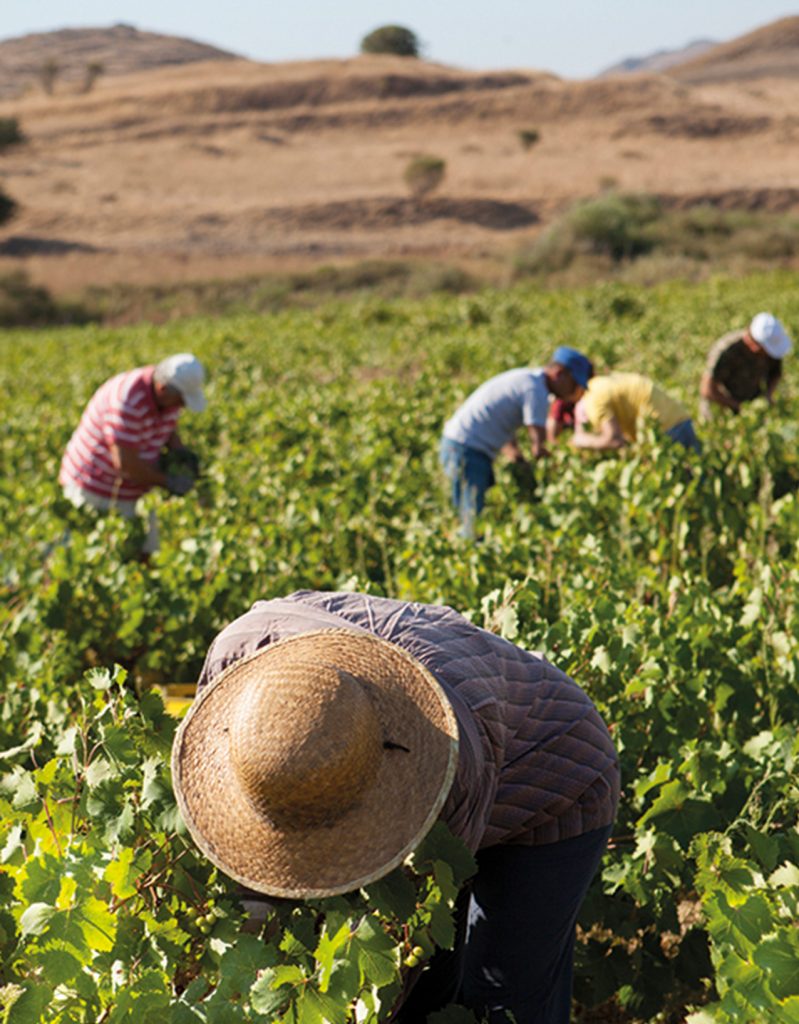 A cooperative has been operating since 1930 in the homeland of the god Hephaestus, in order to bring together all the wine-growers of the island. Limnos soon became famous for its naturally sweet wines, even though it also produces all other wines. The winery of the Union of Agricultural Cooperatives of Lemnos is located at the port of Agios Nikolaos (Solinaria area), and when you visit, you will have the opportunity to see from up close the old concrete tanks where wine was stored. The varieties produced here are the Muscat of Limnos, a clone of the Muscat of Alexandria, and the Limnio, which is a red Greek variety, one of the oldest of the island. The wines worth trying are of course the sweet, as well as the dry white of the Muscat grape variety which are quite aromatic, but also slightly spicy due to the region’s volcanic soil. Also, the Limnio produces dry red wines high in alcohol content, as well as semi-sweet with flower and herb aromas.

Found at a distance of 2,5 km outside the Chora of Sikinos, at an altitude of 400m, is the Manalis Winery perched on a balcony with a breathtaking view of the Aegean Sea. It is a vineyard that has been revived with arid Cycladic varieties grown in the rugged microclimate of the Aegean and produce unique wines. It is worth trying the white from Assyrtiko, Aidani and Monemvasia, which is quite aromatic, with a moderate body and sharp acidity, making it an ideal accompaniment for fish meze appetisers. Also interesting is the flavour of the red wine, produced from the Mavratragano and Limnio varieties, with a deep red colour, a complex fruity aroma and a rich taste. For more than a year now, the Manalis winery has been operating with renewable energy sources, 100% environmentally friendly, and it can be visited daily from June to September. Visit it at dusk for a wine tasting at the entrance bar, or even a guided tour.

Visit Manalis Winery at dusk for a wine tasting at the entrance bar.

Linda Kapetanea, dancer and co-founder of the RootlessRoot company, will present the dance performance titled “Stones & Bones” this coming April at the Stegi Onassis Foundation.